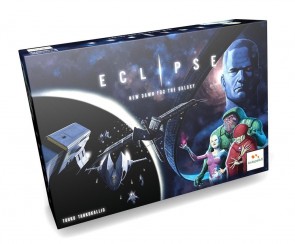 Eclipse will take you to a classic cosmic enterprise, where players will be in charge of civilizations from a distant and peaceful galaxy.

Actually, peaceful may not be entirely accurate, because once you open the box with its heavy cardboard, wooden blocks and plastic ships and start playing the game, it's every man for himself.

The game features seven races in all, including humans and six alien races. Each race has specific abilities that will guide your strategy as you play.

Eclipse demands that you manage three different elements. Science will let you purchase more technology. Material will be used to buy ships and outposts. And loans will allow you to run your business without going dead broke.

With science you can buy technology that will improve your starships (by giving them anti-matter cannons, for example), or you can use it to change some of the rules of the game, by colonizing the most advanced planets.

Eclipse will offer players many different options for earning victory points, giving you plenty of choices for your developing strategy as opportunities arise. With all these choices, you'll have to keep an eye on your opponents – they could surprise you if you're not careful!

The game is played over nine rounds, during which you'll earn victory points for fighting battles, launching diplomatic missions, conquering space, conducting research and building monoliths right out of 2001: A Space Odyssey. You'll have plenty of chances to grab the win – but so will your opponents!

Your turn will consist of the action phase, combat, maintenance and a little housekeeping, just to get your markers ready for the next round.

On your turn, you can perform as many actions as you like, but be careful – during the maintenance phase, you'll have to pay for those actions, and if you bankrupt your civilization, you'll be able to watch the decline and eventual extinction of your empire.

Of course, you will have many actions available, including exploration, extending your influence, research, building improvements or structures, and moving. You'll have to choose carefully, and consult the management board in front of you.

The management board for your empire will show you all the improvements and population ready to take over the universe, and let you see all the information you need to perfect your conquest of the galaxy. The cosmos will unfold before you as you explore more uncharted space, growing before you gradually as the game progresses.

Combat, that staple of international conquest everywhere, is performed using standard dice. A six is a success, and a one is a failure. You can add modifiers to the dice to bring them up to that winning six. Start off easy with a few missiles, and if that doesn't get the job done, turn to the good old standby, lasers and shields.

If you're a fan of civilization games or infinite space, Eclipse should be on your radar.

Princess Ryan's Star Marines
3.0
R Rliyen
"Game's okay, but the rule book doesn't do it any..."