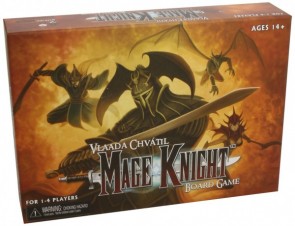 The WizKids Mageknight board games puts an entirely new spin on the traditional Deck Building game by framing it in an epic RPG-esque experience. Dubbed "Deck building with a purpose", the Mageknight board game puts you in control of one of four powerful Mageknights as you explore (and conquer) a corner of the Mageknight universe under the control of the Atlantean Empire. Build your army, fill your deck with powerful spells and actions, explore caves and dungeons, and eventually conquer powerful cities controlled by this once-great faction! You will not be the only Mageknight traveling the land (unless you are playing by yourself!), and though opposing Mageknights may be powerful allies, only one will be able to claim the land as their own at the end of each campaign.

The initial Mage Knight offering for release will be a board game designed by Vlaada Chvatil, designer of the acclaimed games: Dungeon Lords, Through the Ages and Galaxy Trucker.

"For me, Mage Knights combine the greatest fantasy archetypes -- honor and wisdom, strength and magic. I want to bring to life a Mage Knight as an individual who steers the wheels of history and gives birth to legends. My hope is to capture that essence in a new and engaging way for fantasy fans around the world" says Chvatil.