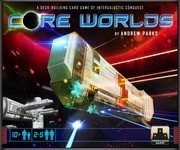 The ancient Galactic Realm, ruled from the Core Worlds of the galaxy, is waning. Now, the barbaric kingdoms that lie beyond the galactic frontier are amassing their strength, choosing this pivotal moment to strike at the heart of the fading republic, establishing new empires built upon the ashes of decaying civilizations.

But these outer systems are not yet strong enough to engage the forces of the Core Worlds directly. The young kingdoms must first gnaw at the edges of the crumbling frontier, developing new types of units and shrewder tactics. They must build up their energy resources to launch magnificent fleets and overwhelming ground forces. Then, when the time is right, they must strike at the galactic core itself, claiming the most exalted planets for themselves.

Core Worlds is a deck-building card game for 2-5 players. Each player controls a barbarian Star Empire represented by many cards. Throughout the game, players will invade Worlds and draft new Units and Tactics into their Empires. Each card lists its Empire Points in the upper right corner. The player whose Empire contains the most Empire Points at the end of the game is the winner!

5 stars
(0)
4 stars
(2)
3 stars
(0)
2 stars
(1)
1 star
(0)
Rating
3.3
Already have an account? Log in now or Create an account
April 19, 2019 (Updated: April 29, 2019)
Rating
4.0
Unless its expansion makes some changes, this is the game I will want to be playing when I’m playing Eminent Domain. This is the deck-building space game to go for. (To be fair, though, there isn’t much interaction short of “I need to grab that before you do” and it goes on WAAAAY long with 5 players.) This one feels like I’m conquering planets and building up a space empire. As with Thunderstone, it’s a deckbuilder in which I do more than just shuffle cards around and get more cards. I’m curious as to how it plays with 2, and I’m also curious about the expansion. (I have heard that, like Eminent Domain, this too can get repetitive after only a few plays.)
L
Legomancer Top 10 Reviewer 158 reviews
Comments (0) | Was this review helpful to you? 0 0
September 19, 2019
Rating
4.0
Playing with more than 3 is not advised if there's an AP player at the table. First expansion really makes it shine!
S
Ska_baron Top 50 Reviewer 20 reviews
Comments (0) | Was this review helpful to you? 0 0
April 18, 2019
Rating
2.0
D
dysjunct Top 10 Reviewer 133 reviews
Comments (0) | Was this review helpful to you? 0 0
Discuss this article
Log in to comment
Posts in discussion: Core Worlds