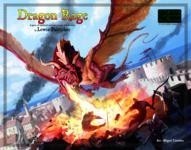 Dragon Rage is an introductory wargame with a fantasy setting.

Dragons and other monsters attack walled cities, trying to destroy as much of the city buildings as they can while the city garrison fights back. Control the invading monsters or the city forces in a mercyless struggle!

This is new edition from Flatlined Games with revised and expanded rules.

This new edition is only available via mail-order from flatlinedgames, as this limited 1500 copies print run is not available in the distribution channels.

April 02, 2020
Rating
3.0
There's more to this than meets the eye. Whilst there's a big crapshoot element with the dice, you roll enough of them to even out and there's a surprising amount of tactical choice under the bonnet although it takes several plays for this to come out. I also love the variety on offer - two different boards, orc and human troops and a whole grab bag of fantasy monsters including dinosaurs! Not massively happy with production quality (board is too cluttered, art poor) or rules (a number of clarifications needed) but still a good choice for a medium length two-player game.
MT
Matt Thrower #1 Reviewer 286 reviews
Comments (0) |
December 15, 2020
Rating
3.0
GS
Gary Sax Top 10 Reviewer 101 reviews
Comments (0) |