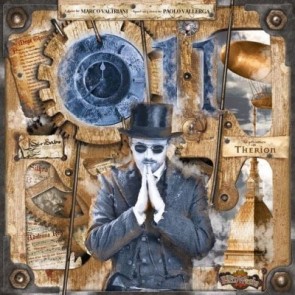 Inspired by the musical stylings of the Swedish symphonic metal band Therion, 011 is an investigative adventure for 3-6 players set in a steampunk version of the ancient Italian city of Turin. The game is based on Therion's short film "Adulruna Rediviva," written by Paolo Vallerga of Scribabs.

011 pits the members of Therion, in the guise of the classic steampunk-style characters they played in the film, against the spirit of the wolf-god Fenrir in a race to prevent the final battle of Ragnarok from destroying all of creation, and mankind with it. The players must use the unique skills and talents of the band members to collect the pages of a long-lost musical score and perform it before the world comes to a shattering end. But one of the investigators opens his soul to Fenrir, betraying humanity for the gift of immortality!

011 is a "semi-cooperative" game. The players must work together if they are going to uncover the secrets to stop Fenrir, but there is only one winner. Defeat can be for all, victory is only for one!

011 was designed by Marco Valtriani, and will feature photographic artwork taken from Therion's short film, including images of the band members themselves.