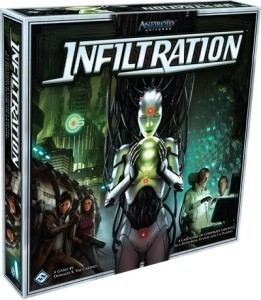 Designed by Donald X. Vaccarino (Dominion, Kingdom Builder) and based in the Android universe, Infiltration is a tense card game of futuristic larceny in which two to six players take the roles of thieves, competing to steal valuable secrets from a highly secured corporate facility. The most vital information lies deep within the complex, but each step inward takes you farther from escape. Worse yet, corporate mercenaries are closing in! How long will you push your luck as you avoid security patrols, surpass rival thieves, and try to download the most data before the building is locked down?”

With 32 different rooms, and 12 in use per game, Infiltration offers a wealth of replayability. Each player’s escape remains at the Entry Room, with the impending threat of it sealing over. Will you make it out of the CyberSolutions complex with enough information, and enough time to make it out of the Entry Room? Put your luck to the test in the second quarter of 2012.

May 04, 2019
Rating
3.0
There's some fun bluffing in this game and it manages the theme well. But most of what it does is done better by other games, Dungeonquest in particular.
MT
Matt Thrower #1 Reviewer 286 reviews
Comments (0) |

Rating
2.0
Already have an account? Log in now or Create an account
April 19, 2019
Rating
2.0
L
Legomancer Top 10 Reviewer 158 reviews
Comments (0) | Was this review helpful to you? 0 0
Discuss this article
Log in to comment
Posts in discussion: Infiltration - A Card Game Set In The Android Universe by the Designer of Dominion - In Stores Now

Codenames
5.0
L Legomancer
"I'm not much for party-type games, and when people described..."