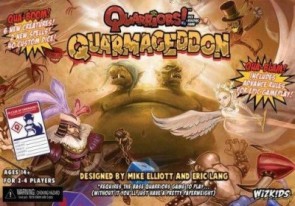 Qua-Boom! After an epic battle between Quaxos and the Three-Eyed Dragon of the Quarmageddon – the Quarmageddon is released upon us! The second expansion set to the Quarriors™ Dice Building Game™ adds 40 new custom dice powering 6 new Creatures and 2 new Spells for you to bring a serious smack-down to the battlefield of hexahedron monster combat.

Some battle-hardened Creatures come equipped with a new “Immunity”; ability so they can laugh off whatever your opponents throw at you! No guts – no Glory!

This expansion set features an updated rulebook and a box that stores the expansion and base set.

December 15, 2020
Rating
4.0
Far better than the first expansion for this game, though, you really do have to play this game as a random thing to do between to people in an evening type thing. Not the most strategic game of all time.
GS
Gary Sax Top 10 Reviewer 101 reviews
Comments (0) |