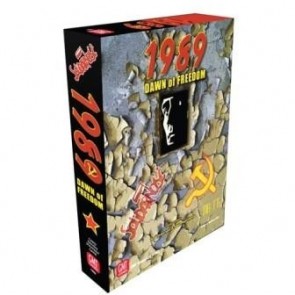 1989 is an exciting, fast paced game simulating the end of the Cold War in 1989. During this amazing year, a series of democratic revolutions ended the 40 year Soviet empire in Eastern Europe. 1989 simulates the political, social and economic aspects of these revolutions using a card driven system similar to Twilight Struggle.

The other player plays the Democrat. At the dawn of 1989, behind the iron curtain, no one considers revolution possible. The goal of dissidents is to create a civil society outside the control of the Communist regimes. On their side are students who are fascinated with the style and pop culture of the west, and the Church. Against them is the vast apparatus of the Communist state. Their challenge is to persuade the workers, who are the bulk of society, to join their cause.

One player plays the Communist. At the start of the game he holds unquestioned power across the six nations of the Warsaw Pact. But there are omnious clouds on the horizon. The new leader in Moscow has declared no more will Soviet tanks prop up tottering Communist governments. The economies, after decades of central planning and stagnation, have reached various stages of crisis. Inside the churches and among the students and their professors there are dissident movements that have been emboldened. From crushing dissent to offering concessions, the Communist player will have to use a variety of strategies in a struggle to hold on to his empire.

April 02, 2020
Rating
3.0
I was amazed by how some simple rules tweaks and a clever map layout was able to transform a game based heavily on Twilight Struggle in to something which looks similar but requires quite different strategy. I have a feeling that the random mechanics used in scoring here make the game a little on the chancy side, and the theme is overall less appealing than TS (even if it actually suits the base mechanics better) but otherwise this is shaping up to be a great alternative to TS fans who are growing jaded after repeat plays of the original.
MT
Matt Thrower #1 Reviewer 286 reviews
Comments (0) |

Rating
3.0
Already have an account? Log in now or Create an account
April 19, 2019 (Updated: April 29, 2019)
Rating
3.0
I enjoy Twilight Struggle, even though I'm terrible at it, so I was really looking forward to this sort of sequel to it. It's strange that even though this was a period of time I actually lived through, I don't know much about the events around it. It feels a lot like TS, naturally, except for the weirdo scoring conflict bit that I really don't know how I feel about. It seems strange to me to have a lot of strategic play culminate in a separate card thinger which then determines a die roll. It seems oddly bolted on and incongruous. Still, I'd like to try it again and see if that part grows on me. Either way, I think I still prefer the original.
L
Legomancer Top 10 Reviewer 158 reviews
Comments (0) | Was this review helpful to you? 0 0
Discuss this article
Log in to comment
Posts in discussion: 1989: Dawn of Freedom - In Stores Now