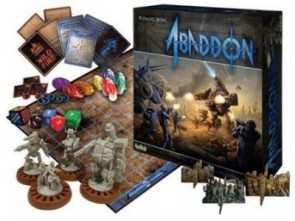 From renowned game designer Richard Borg (Memoir ‘44, Battle Cry)! In the distant future, mankind will make a mysterious technological leap forward, across space to a planet dubbed the Abaddon. The desolate wasteland is rich with Feronium power crystals - a curious source of unimaginable energy. Possession of these crystals is the main cause of dispute between the Satellite City-States and the Commonwealth Alliance. Using giant bio-mech suits made from modified military vehicles and alien technology, these two sides fight a never-ending war for territorial control of the Abaddon!

Choose your allegiance and lead your army in non-stop excitement as you forge through unforgiving terrain, fight to overcome random and bizarre technological glitches, and battle your enemies in never-ending war.

Pax Porfiriana
5.0
M mc
"Engine-building, in a way, through the tableau that provides special..."