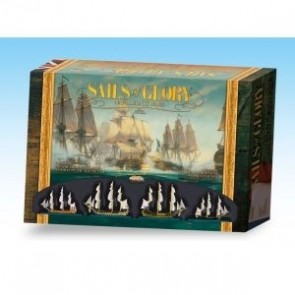 Sails of Glory, will recreate naval warfare in the Age of Sail (1650-1815). The Wings of Glory game system will be modified and expanded to represent accurately battles at sea between the large sailing ships of the past centuries.

Created by Andrea Angiolino and Andrea Mainini, Sails of Glory will merge miniatures, cards and boardgame mechanics, using the same intuitive system of Wings of Glory, which features a special deck of maneuver cards to represent the different movement capabilities of each model. The game will be supported by a range of painted and assembled 1:1200 miniatures.

The first series of Sails of Glory, scheduled to be released in Summer 2012, will be set in the Napoleonic Age.

Update: The Sails of Glory Starter Set, along with several expansion packs. are scheduled to shop in August 2013.

Pandemic
4.0
A Aarontu
"A co-op game that is fun and relatively easy to..."