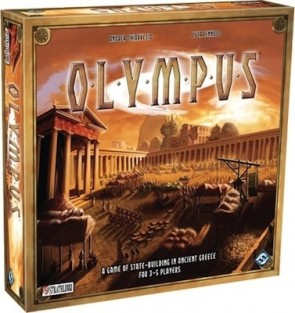 Praise the gods, and reign over Ancient Greece!

In Ancient Greece, the city-state was a thriving center of population, culture, and commerce. The names of these great places echo through the halls of history: Thebes, Sparta, Athens. Each competed with its neighbors for power and glory. They grew, advanced their cultures, erected magnificent buildings and temples, and warred against each other.

A leader of a polis or "city-state" worshipped the mighty Olympian gods for the wisdom to lead. With the favor of the gods these leaders developed their poleis' populations and cultures, waged wars, and erected magnificent buildings and temples.

Now you have been chosen by the gods to lead one of these poleis - oversee your people's path to greatness and your own path to dominion over all of Peloponnesus!

In Olympus, players send out their cunning priests to worship the fickle Olympian deities, who, in turn, grant divine favors to any priest who will perform a ceremony in their name. Use the gods for your own mortal purposes to increase your agricultural production, advance your culture, erect buildings, and go to war.

Players oversee the governance of rival city-states in Olympus, a deeply strategic board game of civilization-building for 3-5 players

Olympus was originally published by Stratelibri and distributed in the US by Fantasy Flight.