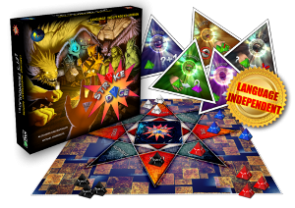 A game based totally on D4 Dice. A new way to use a die.

Strike Dice is a game for 2-4 Players played with D4 Dice. Purpose of the game is to collect the 5 of the 8 Triangle Cards. To collect a card you must place the most D4 dice on the board at the end of every Triangulation, meaning game. The board is separated into a number of shapes. The large kit shapes in Red and Dark Blue are called Tribases. Each player can place 1 D4 Dice on a Tribase. The Red ones are strategically important as they help to spread your dice on the board.The small Red Triangles, at the base of each Tribase is an Exite Point (Trigate). There are 4 in total and thanks to these Exit Points, your dice can move on the board.


SET-UP
Shuffle the cards and place them face down in the centre of the board. Each player selects a color and takes the 8 Pawndice.


GAMEPLAY
Roll to see who goes first. The player with the highest roll, plays with the Pawndice he just rolled and places it on any Red Tribase (Evil, Luck, Good or Intellect). If you roll a 4, then you must reroll as you can place a (4) only on the Dark Blue Tribases (the reroll only applies at the beginning of each new Triangulation). The second player does the same and then rolls a further Pawndice. This dice enters the board from the already captured Red Tribase’s Trigate. As a player cannot have 2 dice on the same Tribase, the newly rolled Pawndice must move. The number of spaces it can move is decided by any sum of the numbers on the base of the D4 dice.


The winner of a Triangulation is the player with most Pawndice on the board. In the event of a tie the total powers of both players' Pawndice are calculated and the highest power wins. The winner claims 1 card from the stack. Keep this card secret until you play it for the first time in the next Triangulation. The cards are 8 in total and have effects which enforce you during the game. These cards carry a symbol on them and you can find the same symbol on a Tribase on the board. When you place a dice there and you own the specific card, you can trigger its effect.


VARIANTS
For the 3 and 4 players mode there are some variants that change the games and offer a different result. The 4 player game for example is played in teams with team member sitting opposite each other. Here your and your ally's Pawndice work as a team.

You can download the rules following this link: http://boardgamegeek.com/boardgame/92757/strike-dice