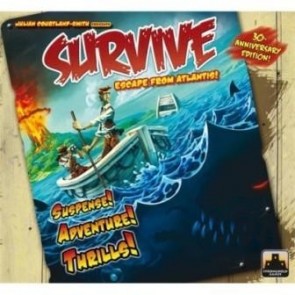 It’s early in the 20th century – a time of exploration and adventure. The mysterious island of Atlantis has been discovered in the middle of the ocean, and there are rumors of great riches to be found there! After reaching Atlantis, the explorers are ready to return home with treasure and artifacts. But Atlantis begins to sink! In a panic, the adventurers try to avoid a terrible fate. The luckiest will find a boat to return home while the less fortunate will have to try to swim for it. But nobody will be safe from the Sea Monsters, Whales, and Sharks that live in the ocean around Atlantis!

Who will reach dry land with their riches? Who will Survive!?

April 22, 2019
Rating
3.0
I like Survive well enough, but for me it has never been quite the monumental game as it is for everyone else. It is indeed mean and cutthroat, but it does it in a somewhat detached way, like it just assumes people will play dirty with no mechanical impetus to do so. In other words it doesn't force players to go for blood, and it's not much fun when people don't. My best games of it have been with my children, who take delight in hassling each other and their parents. Still, it is a fun one, and I'm glad we have it around.
SI
san il defanso Top 50 Reviewer 55 reviews
Comments (0) |