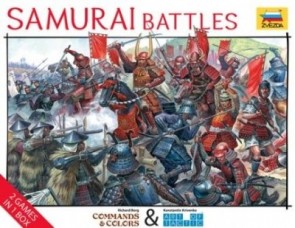 All wargames can be divided into two types: the beautiful and the historical.

The first uses miniature soldiers, and the rules only approximately reflect the realities of battle. The second attempts to take into account all aspects that influence the battle as fully as possible, but the fighting units are represented by simple cardboard boxes with numbers. Naturally, most wargamers have split between these two extremes. The heart of each always starts to beat faster at the sight of a beautiful figure of a knight, but on the other hand is always annoyed when a detachement of peasants armed with sticks rout the knights simply because the rules are too arbitrary. Samurai Battles is the game which should reconcile the lure of players to the beautiful and the desire for historical accuracy on the board. The Zvezda company has long been known around the world for its magnificent miniatures. The quality of their soldiers in 1/72 scale is perhaps the best in the world. All pieces are easily assembled from a few parts, yet at the same time the delicacy of execution is so high that the emotions can clearly be seen on the faces of the soldiers. But, that's not all this new wargame from Zvezda can boast. The rules for Samurai Battles deserve their own discussion. To begin with, inside the box are two rules versions. It is wrong to think of these as variants of the same mechanics such as "harder / easier". These are two entirely unique games from different designers. The first rules set is by Richard Borg, the world-renowned auther of Memoir '44 and BattleLore, as well as the Commands & Colors gaming system. This game system forms the base of the rules for

Samurai Battles, along with a deck of Command cards, Dragon cards, special Samurai Battle dice, and Honor and Fortune tokens. Even if you have never played before, learning the fundamentals of this game system is straightforward and enjoyable. The second set of rules uses the new Art of Tactic game system, developed by Zvezda and already known to wargamers through the Barbarossa, 1941 game, which represents the German invasion of the Soviet Union in 1941.

As the title suggests, Samurai Battles deploys the players on the battlefields of medieval Japan. It includes ingenious features to combine the two loves of wargamers:

Both the Art of Tactic and Commands & Colors are open game systems. There is absolutely no limit to how the game can be expanded to please the players, from individual units so each player can raise the army of his liking, to full-fledged expansions with new maps, new scenarios, and new gameplay elements.

Samurai Battles is the perfect blend of the beautiful and the historic, sure to please every breed of wargame fan - and the perfect way to explore the exciting battles of one of the most intriguing periods in the history of warfare. Whether you prefer the Art of Tactic or Commands & Colors style of play, Samurai Battles offers everything a wargamer could desire!