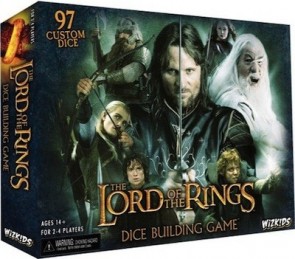 Lead an army of brave men, wise elves, battle-hardened dwarfs, and even the short-statured but stout-hearted hobbits – represented by custom dice – to stand between Sauron and his armies of orcs, goblins, trolls and ringwraiths as they scour the land to find The One Ring.

Gain glory for your people as you work together to defeat Sauron and save Middle-earth!

Players must work together to assemble an army of dice representing brave Men, battle-ready Dwarves, wise Elves and stout-hearted Hobbits and muster their troops against the forces of Sauron. But beware — some may be tempted by the power of The One Ring and become corrupted by evil!

Citadels
4.0
B bfkiller
"I love games that actively encourage players to put themselves..."