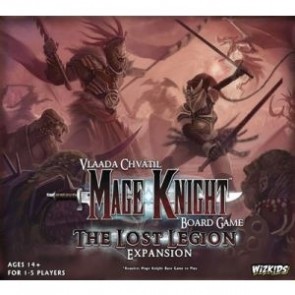 Have the Mage Knights found a foe who rivals their power? An army travels the lands of the Atlantean Empire led by the mysterious General Volkare. What is his purpose for being here...and how did he survive The Breaking? The first expansion to the Mage Knight Board Game, The Lost Legion comes complete with General Volkare on a Clix base, a new playable Mage Knight (Wolfhawk), (48) Enemy/Ruin tokens, (16) Unit Cards, six Map Tiles, (12) Advanced Action Cards, eight Artifacts, and four Spells, plus exciting, new Scenarios and a Rulebook supporting five players.

Nexus Ops 1st Edition
4.0
A Aarontu
"A quick, light, and easy wargame that is actually pretty..."