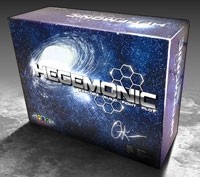 Hegemonic is a 4X game of galactic exploration, empire building, conflict, and cunning. Use Industrial, Political, and Martial systems.

In Hegemonic, each player assumes the leadership of a Great House. Players will explore sectors of the galaxy; build up their empire’s industrial, political, and martial capacity; employ far-reaching technologies to outmaneuver and out fight competing empires; and perform calculated actions to plot their way to hegemony.

Hegemonic is distinct among empire-building games because the industrial, political, and martial systems of your empire each expand your overall economy, can be used to initiate direct conflicts across lines, and contribute power towards victory. Players earn points at the end of every turn based on the relative power they have in each galaxy region. Players able to strategically hold and maintain a majority stake in the regions through industrial expansion, political leverage, and military force, will be poised for victory. But never underestimate a well-timed and daring move from your opponent – they may snatch victory from your grip!