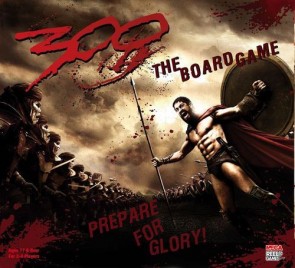 "Will you win honour and prestige at the hot gates of Thermopylae? Or will you crush those arrogant Spartans? Take on the role of the Spartans or the Persian Empire in this board game based on the blockbuster movie 300.

In 300 the board game, you will recreate the famous battle of Thermopylae as shown in the blockbuster film 300. As the Spartans, you'll need to kill as many units of the Persian Empire as possible to gain 100 Glory points. As the Persian Empire, you'll need to either smash the Spartans entirely or delay them long enough for Ephialtes to come through the goat track (6 rounds).

Rating
3.0
Already have an account? Log in now or Create an account
July 28, 2008
Rating
3.0
I didn't watch the movie because I thought it was fascist propaganda. But that doesn't matter since I'm rating the game here. This is a simple wargame which is definitely luck heavy. However, it is also very thematic and this makes the game shine. Personally I would prefer historical artwork instead of bare breasted Spartans fighting in thongs, but the game is so much more fun when speaking and visualizing the movie quotes while playing a card. If every eurogame out there was replaced by a games base on an action movie, I think the board gaming world would be a better place.
S
Schweig! Top 50 Reviewer 9 reviews
Comments (0) | Was this review helpful to you? 0 0
Discuss this article
Log in to comment
Posts in discussion: 300: The Board Game