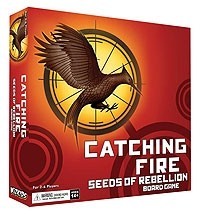 Win At All Cost! Stoke the seeds of rebellion and fight for your freedom (and survival) with these tabletop game offerings based on Catching Fire, the sequel to The Hunger Games!

Ever since you were eligible for the Reaping, the Peacekeepers had their eye on you - the food supplies that went missing, the graffiti denouncing the Capitol - they had a good idea it was you. Until now, you thought it best to steer clear of open conflict. But, the whispers for volunteers to help the rebellion made it clear it was time for you to take action. When you finally reached the leaders of the rebellion your reputation had preceded you. Glad to have your skills, they immediately assigned you to your current mission - to set up secret bases throughout Panem. If you are successful, your efforts will ensure at least a chance for the rebels to make a difference. Fail, and they won't stand a chance!

Are you the ultimate puzzler? Test your mettle with Connect with Pieces Puzzle Building Games, the all-new building game where many of the pieces can be played in more than one location. Match up symbols on the puzzle pieces and find the best possible fit to earn points or block your opponent from doing the same.

In the Catching Fire: Shuffling the Deck Card Game, players secretly take control of one of the main characters of Catching Fire (the sequel to The Hunger Games) and lead them to gain the support of the people of Panem. Through a series of challenges, you will provide a source of hope and inspiration for the citizens of the Districts and become a symbol for independence. But, be wary! The eyes of the Capitol - and President Snow - are always watching!