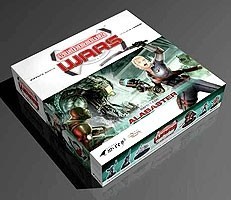 In Space, Everyone Will Hear You Scream! Battle against an unrelenting nightmare in Sedition Wars: Battle for Alabaster, a fast-paced, tactical miniatures game of deep space survival horror!

Set in a vast galactic sprawl, the Sedition Wars erupts in violence and chaos! Patrolling the Edge, the very fringe of human space, is the Vanguard. As enforcers of order, the Vanguard faces a myriad of dangers. Now, as the Edge systems begin to buckle under the pressure of the Firebrand rebellion, a new threat has emerged!

When a vessel goes dark, the Vanguard are sent to find out what has happened and put down the Rebels they expect have taken over. Little do they know they are about to encounter an intelligent and highly evolved Nano-Virus - The Strain! Battle against an unrelenting nightmare as members of The Vanguard in Sedition Wars: Battle for Alabaster, a fast-paced, tactical miniatures game of deep space survival horror!

Pandemic
4.0
RB Ryan B.
"Pandemic is a cooperative game that has a lot of..."