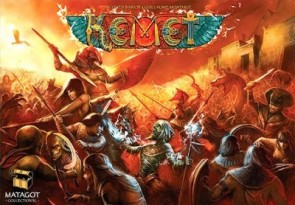 Conquer an ancient world of Egyptian gods and mythological beasts in Kemet.

A game of the same vein as Cyclades, with a strong atmosphere which will transport you to the ancient times. Between battles and magic, be the finest of all the strategists.

Conquer Territory! Defeat Your Enemies! Appease the Gods! In Kemet, players lead a tribe of ancient Egyptians as they strategically maneuver their troops to control the most territories and battle against their rivals.

Draw upon the powers of the Egyptian gods and recruit mythical creatures to reinforce your armies and vanquish those who oppose you and your ambitions!

The Alpha Predator
April 19, 2019
Rating
5.0
One of the first questions I always get once someone finds out that I am “Into” Board games is “What is your favorite game?” The last few years my answer has been, without hesitation, Matagot’s Kemet.

Like any good love story, it started with me admiring it from afar. I loved the Egyptian Lore. I like that it included large, classic four-sided dice (Because Pyramids). I adored the fact that you didn’t actually use those dice for rolling. I found the instruction manual online and scoured over it. EVERYTHING about it was intriguing.

Unfortunately for me, my interest in Kemet was piqued at the beginning of what would be the Great Kemet Drought. Kemet wasn’t out of print but it was “between printings.” Apparently Matagot was having issues with their supplier that caused Kemet to not be available in the U.S. via traditional outlets for what turned out to be almost a year. Between refusing to pay scalper prices on E-bay and scouring the local buy/sell/trade groups, I decided to pick up another Matagot game that is mentioned in the same breath as Kemet, Cyclades. I thought it was a fantastic game and only reinforced my desire to pick up Kemet. And, let’s be honest, it gave me the excuse to pick up one of the coolest expansions ever: The C3K expansion, which allows you to use the creatures from Cyclades in Kemet and vice versa. Yes, I actually owned a Kemet expansion before I even had the base game.

Finally, months down the road, I stumbled across a copy of Kemet being sold on Craigslist for an incredibly reasonable price and pounced on it. Hell, I even bought his copy of Sentinels of the Multiverse as a thank you for selling me his copy of Kemet.

I had the little stab of fear as I brought it home, that one where you have built something up in your mind so much; it is definitely going to be a disappointment, Right? Wrong.

Kemet supports 2 to 5 players straight out of the box. This is accomplished with a double sided board with one side for 2 and 4 players and the other for 3 and 5 players. When playing with the smaller player count, only one side of the Nile is used. Each player will have a starting city but none of them have an advantage or disadvantage. There are no choke points and, though ingenious map making, all cities are within three spaces of each other. Troop movement is also enhanced via obelisks, which you can teleport to from any of the pyramids within your city.

On the surface, having a teleporting ability in an area control game sounds like a horrible, bordering on game breaking, idea. Instead, it is used to enhance gameplay in unexpected ways. This is truly the even playing field of lore.

I mentioned the Pyramids within your city. These are represented by the 4 sided dice. They come in three colors and each one has to be leveled up individually. Red represents Attack, Blue is Defense and White is (mostly) Economy.

The currency of Kemet is prayer points. You will use those prayer points to, among other things, purchase power tiles of the three different colors. This is where Kemet truly shines. Everyone begins the game in the exact same level. However, during the first day phase…hell, even in the first turn of the first day phase, everyone has distinctly different powers. And they aren’t some randomly distributed powers; each one was a direct choice of the player. You have to decide exactly how important it is to you to get that specific power because most tiles are unique. Once it is bought, no one else can have that power. And, of course, you want ALL the powers. This is why you never see step by step strategy guides for Kemet, because you never know what will be available after the opening turns of the game.

Take the “Priestess” tile, it allows you to purchase any other tile for the rest of the game for one less prayer point and it only costs you a single prayer point. Or the “Charge” card where you gain +1 to strength in every battle that you are the attacker and, again, it only costs one prayer point. Of course you want both of these cards but which do you want/need the most? Delaying even a single turn will allow an opposing player to snatch it up before you. In the case of these two examples, there is actually two of each of these tiles in the game but a player can only purchase one of them. In anything above a two player game, someone isn’t going to get one of these tiles. And you are doing all of this at the same time you are trying to conquer temples (which net you more prayer points if you hold them at the end of the round), earn victory points and upgrade your pyramids to get even stronger cards. Buying these power tiles isn’t just building an engine; it is creating a war machine.

So, how does a game that includes dice but doesn’t have you rolling them execute combat? Players are given 6 cards at the beginning of the game. Every player has these same 6 cards. On each card is a number that represents Attack. This number will be added to your total troop count in a skirmish to determine the winner. There can also be present a blood icon, which indicates how many opposing troops you kill during the attack and a shield icon, which shows how may blood icons you can block. There is no randomness to your attack; you can’t blame the dice for your bad luck. You simply pick one card, and then discard a second card. Both players reveal their cards and the person with the highest Attack wins. But now you are down to 4 cards and everyone knows which attack card you played and that it is no longer available to you until you use up the remaining cards. Rest assured they will use that information against you.

You might think all of this straightforward combat and ruleset would make for a sterile or boring game and that is when Kemet gives a nod to chaos. I always say if you are going to put Hand of God mechanisms in a game, freaking call it the Hand of God. Kemet does just that with Divine Intervention cards. These advantage swaying cards can do things like bolster your troops attack or defense strength, earn you extra prayer points or cancel other DI cards. Just expect them to be played by your opponents at the most inconvenient and plan wrecking time and you’ll rarely be disappointed.

I could go on for another 1,000 words extolling the virtues of Kemet and delving deeper into the mechanisms but let me just say this: All of these parts of Kemet don’t just run like a well-oiled machine, they hum like a perpetual motion engine. They effortlessly fit together in a way that proves the supreme amount of effort that went into fine tuning them. I will give this one caveat: Make sure you play your first game of Kemet with someone who is genuinely interested in teaching you the game, pointing out synergies between tiles and explaining what each one does. Kemet’s worst enemy is a teacher who is more interested in wiping the floor with you than explaining the nuances of the game.
W
WadeMonnig Top 10 Reviewer 195 reviews
Comments (0) |
July 28, 2020
Rating
5.0
T
thegiantbrain Top 50 Reviewer 36 reviews
Comments (0) |

Impulse
2.5
J Jexik
"Felt more like wrestling the game than playing something. ..."