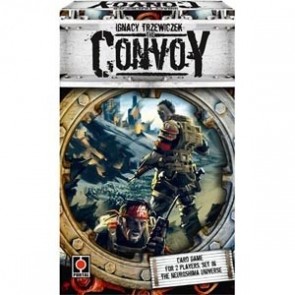 Are you ready for the Apocalypse? The Moloch have made their decision - New York must be razed to the ground, breaking the people's defense lines and ending the resistance - permanently! Now, a convoy of steel-death swarms to the east, threatening to destroy everything in its path! Unless the Outpost soldiers can stop the march of Moloch, humanity is lost! Set in the post-apocalyptic world of Neuroshima, Convoy is an asymmetric, two-player game where one player controls the convoy of powerful robots moving towards New York to turn it to ashes, and the opposing player commands the Outpost troops, seeking to slow down the convoy - and destroy it!

Rating
2.0
Already have an account? Log in now or Create an account
April 19, 2019
Rating
2.0
Sorry, Ignacy, this just doesn't really work.
L
Legomancer Top 10 Reviewer 158 reviews
Comments (0) | Was this review helpful to you? 1 0
Discuss this article
Log in to comment
Posts in discussion: The Convoy - A New Game in the Neuroshima World - Announced