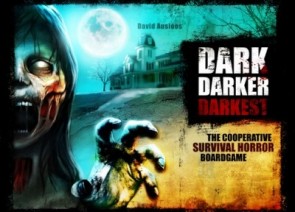 Dark Darker Darkest is an intense cooperative survival horror game in which a team of urban survivors try to fight the darkness in an unsettling location: the house of Doctor Mortimer, which holds the antidote to a virus turning the world into an army of undead. Players must gather the optimal tools to open doors, control destructive fires that slowly destroy the locations of the game, and battle the endless hordes of terrifying creatures that will do anything to slaughter this fragile group, while outsneaking lurking creatures and the eye of the ever-present security cameras guarding the secrets of the house. The game uses icon-driven dice, innovative mechanics to create organic turns that avoid downtime and an intense final act to each sessions that really feels like a crescendo.

Monsters Menace America
4.0
M mikoyan
"This is a fun game but I think the end..."