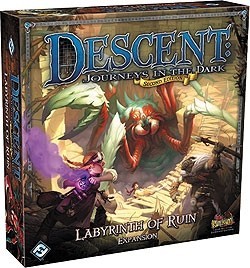 Dreams of fortune and glory, untamed lands, and old mysteries have brought you to the edges of Terrinoth, near to the ruined city of Sudanya. Little is known of this place and its people, but tales and legends give naught but high allure to the seasoned adventurer. A dark omen shrouds your steps when you first discover the scattered remains of a Dunwarr expedition to these lands. Dead and burned, the bodies of these explorers transform to caution what was once a sense of excitement. Your destination of the Pylia Caravan, formed into an encampment for several weeks of local trade, lies not far on the road ahead.

An expansion for Descent: Journeys in the Dark Second Edition, Labyrinth of Ruin introduces an all-new epic campaign, plus new heroes, monsters, classes, and more! Set in a previously unexplored region of Terrinoth, Labyrinth of Ruin takes players on a riveting journey to the broken remains of a forgotten city. Throughout the many quests included in this expansion, heroes will enlist the aid of unique allies in their mission to stop the evil overlord.

The comprehensive campaign in Labyrinth of Ruin features nineteen narratively rich quests. While they can be enjoyed as standalone experiences, these engaging adventures were designed with campaign play in mind, telling the story of an enigmatic sorceress’s vile plot to bring darkness to the world; as with the base game’s campaign, “The Shadow Rune,” Labyrinth of Ruin uses a clever plot system that reacts to players’ successes and failures. With each successfully completed quest, either the heroes or the overlord will grow in power...leading up to a gripping showdown in the campaign’s finale!