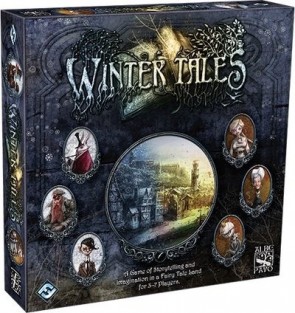 The regime of winter clutches all in its icy grip, but dangerous revolutionaries devoted to spring still resist. Alice, Dorothy, the Tin Man, and the rebels of spring fight a desperate battle against the forces of Snow White, the Mad Hatter, and the soldiers of winter. The Conflict of Autumn may be over, but there are still new tales to tell.

Winter Tales is a narrative board game of storytelling and fairy tale adventures for three to seven players, set in the grim chill of Wintertown. Players control the lives of their favorite fairy tale characters as they seek to complete quests, creating a new fable. In the course of the tale, players tell the story of soldiers battling in the streets and plazas, and rebels laying cunning traps. Can Spring return, or will Winter reign eternally? Craft a new story in Winter Tales!

In Wintertown, players compete for the triumph of either Spring or Winter, but also work together to create a narrative, telling an epic story in an intriguing and satisfying manner. Featuring a series of modules that players can add for deeper strategy, Winter Tales also embodies a mechanism for storytelling unlike any other, resulting in a huge variety of different possible games. As the Regime of Winter battles the rebels, heroic quests are undertaken, and every game becomes a memorable experience.

Rating
4.0
Already have an account? Log in now or Create an account
Alice, Bright & Terrible, with Scalps on Her Belt
August 11, 2019 (Updated: August 11, 2019)
Rating
4.0
It started with a prison shanking and ended with the detonation of a two-angels-fucking superweapon. Somewhere in the middle there was an ecstatic frenzy over a heart-shaped box carved from a magic tree, a zeppelin assault with tin-man–firing cannons, and a puppet show no one will ever forget, no matter how hard they try...

This is what I like to do in pretty much every game, formalized and made the entire point of the exercise. The rules are somewhat obtuse and seem at odds with what they're trying to achieve, which is probably why this beautiful experiment fails so often for so many, as it's a fragile thing that requires the right people to play it the right way with the right mindset in order to properly come together, inflate with hot air, and soar. But man, if you can pull it off it's slick as hell.

And everything'll be just fine.

Note: For our first game we just kinda went for it—there were plenty of rules irregularities but the story came through intact and everyone had a fine time. For our next game I'll suggest playing cards into a stack instead of a line so the magnitude of cards isn't reflexively obvious, and maybe judging the "winner" of the story-bit with a vote, using the number of cards played as a tie-breaker. While a vote won't work in mechanism-focused super-competitive groups (who shouldn't be playing this anyway) it will for us, as we prize a good story over winning or losing.
H
HiveGod Top 50 Reviewer 54 reviews
Comments (0) | Was this review helpful to you? 0 0
Discuss this article
Log in to comment
Posts in discussion: Winter Tales