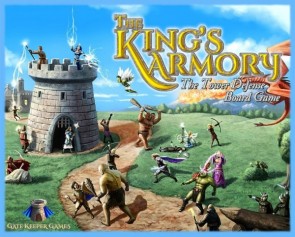 The King's Armory is a 1-7 player co-op game that brings true tower defense to the tabletop. Added RPG and story elements bring depth to the tower defense mechanics.

This 1-7 player game boasts true tower defense. Foes generated by the game (a dice roll and a chart) cross the map to pillage the king’s armory at the other end. Gamers play heroes, who cooperatively control tower placement and recruit “hireables,” strategizing to destroy the foes before they make it to the armory. If the heroes are successful, the foes are vanquished and the king’s armory stays safe. If the foes are successful, they take the armory and use its contents against the king’s own people.

Players never run out of game play choices. With countless combinations of map arrangements, difficulty levels, heroes, recruits, equipment, reinforcements (a special class of assets that can be items, events, or enhancements), foes, and bosses, each game can be a new experience.

Heroes with back stories and unique assets bring flavor text to the game. The story of the armory itself is that a king, in an attempt to preserve the lives of the young military-aged men while still defending the kingdom against foes, has filled his armory with an extensive array of eccentric and powerful weapons – the work of highly skilled gnomes and dwarves. Instead of sending many of his citizens to their doom in time of war, he depends on a few highly skilled heroes and their strategy (particularly with building towers and recruiting skilled ‘hireables’) to fend off the foes and engage his ‘bombastic’ weaponry. Gamers who enjoy story will enjoy this game as much as those with a mind for strategy and numbers.