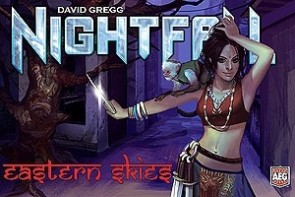 The war for the eternal night rages around the world, and nowhere is it more bizarre than in the Far East. A fully functional city in India nearly untouched by the Nightfall, uncontrolled ghouls from the seas, and strange happenings in the skies are only the beginning. Featuring new starting minions, a new wound effect, and the all-new "Link" mechanic allowing for faster play, this expansion for Nightfall can be played as a standalone game or combined with other Nightfall expansions for enhanced play.