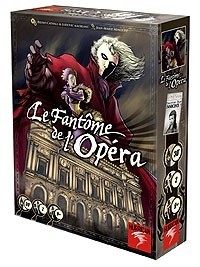 Her voice became his passion. Her love became his obsession. Her refusal became his rage! Set at the Paris Opera House, a beautiful soprano becomes the obsession of a mysterious, disfigured musical genius in Andrew Lloyd Webber's "Phantom of the Opera", a timeless story of seduction and despair!

In Le Fantome De L'opera, Asmodee Editions' two-player, cat-and-mouse game of wits and deception, the opera house is clearly haunted, and the ghost wants to drive off La Carlotta, the lead diva. Chandeliers fall, strange voices whisper from the shadows, and it's only a matter of time before she leaves Paris forever. Portray the Phantom and scare off the opera singer, or play as the investigator and discover the true identity of the fiend - before it's too late!

Lord of the Rings: The Confrontation
5.0
S Ska_baron
"Woah! Nice little game here indeed! I was introduced to..."