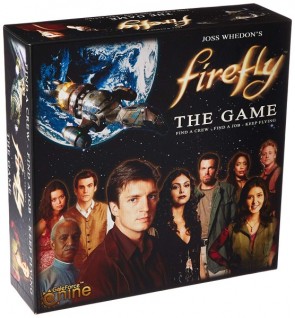 “After the Earth was used up, we found a new solar system and hundreds of new Earths were terra formed and colonized. The central planets formed the Alliance and decided all the planets had to join under their rule. There was some disagreement on that point. After the War, many of the Independents who had fought and lost drifted to the edges of the system, far from Alliance control. Out here, people struggled to get by with the most basic technologies; a ship would bring you work, a gun would help you keep it. A captain's goal was simple: find a crew, find a job, keep flying.” ~ Shepherd Derrial Book ~

Firefly, the popular television series, comes to life in a new board game from Gale Force Nine and Twentieth Century Fox Consumer Products. Compelling characters, great storytelling, and an evocative universe has made Firefly a fan-favorite for over a decade. Now fans of the television show and board games can chart their own course with Firefly: The Game!

In Firefly: The Game, players captain their own Firefly-class transport ship, traveling the ‘Verse with a handpicked crew of fighters, mechanics, and other travelers.

As a captain desperate for work, players are compelled to take on any job - so long as it pays. Double-dealing employers, heavy-handed Alliance patrols, and marauding Reavers are all in a day’s work for a ship’s captain at the edge of the ‘Verse.

This is a "story game" first and foremost—it provides, via cards and mechanics, a series of dots that you and your friends can connect to spin an engaging yarn of your time out in the black. In that regard it has far more in common with Runebound (and the like*) than Merchant of Venus. As it stands, this is a pretty middle of the road pick-up-and-deliver game—but it is an awesome story game.

*This is firmly in the "pull a card, roll some dice, have crap happen" family.

I suppose I should admit that I am not a Firefly fan—I never got past the first couple episodes of the TV series (especially when they were pandering so obviously to segments of fandom that I am not a member of**), though I did enjoy Serenity. This is important to know as my flaccid interest in the license in no way detracts from this fine game.

**Genius move to connect with your core audience, but semi-alienating for the rest of us.

As a licensed product this one transcends—to an amazing degree—the usually poor treatment such things get. The bits are all gorgeous and high-quality, especially the money (and I loves me some paper money†). The game is mechanically sound, works, and provides an interesting storytelling engine. Instead of phoning it in the designers and producers definitely heaped some love and skill on this.

†If you're the kind who would replace the beautiful, evocative, and thematic paper money in this game with [shudder] poker chips then straight up this game ain't for you.

Speaking prematurely and from the hip I get the impression that the sweet spot for this will be 3p—I fear that with 4 there will be just too much "story" flying around as well as too much downtime waiting to get back to yours. But we shall see...

Sagrilarus sez: "Firefly comes with about a dozen scenarios to play but after 20 sessions amongst our group we’ve come to the conclusion that the best approach is to just play for cash. Find a job, keep flying. One of the scenarios does just this, and the nice part is that you can adjust the length of the game by the amount of money needed to win. We opted for a $25,000 game, which is pretty steep, but moved the finish line to $15,000 because, well, it’s Firefly."
H
HiveGod Top 50 Reviewer 54 reviews
Comments (0) | Was this review helpful to you? 1 0
April 18, 2019
Rating
2.0
D
dysjunct Top 10 Reviewer 133 reviews
Comments (0) | Was this review helpful to you? 0 0
Discuss this article
Log in to comment
Posts in discussion: Firefly: The Game