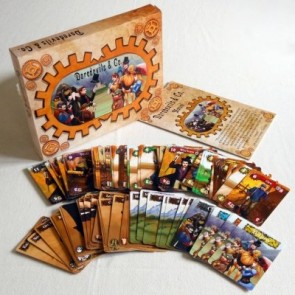 Daredevils & Co. is a steampunk-fantasy tactical card game for 2-8 players. Lead your army of brightness or forces of darkness to conquer mighty fortresses. Massive rivalry and adrenaline from beginning to end of the game. Beautiful, diversified cards offer great variety of tactics that lead to the victory.

The goal of the game is to take enemies' Fortresses. Players choose their units and special cards and each turn attack other players or defend their own fortresses. There are the following game variants:
1. The game ends after an assigned number of sieges. After each siege score is counted up for every Fortress taken. Player who scores the highest after the last siege is the winner.
2. The game ends when a player takes an assigned number of Fortresses.
3. Both scenarios stated above can be played in two variants:
- Deathmatch - each faction competes against the others.
- Team play - bright factions team up against dark factions.

Cutthroat Caverns
2.0
D daveroswell
"I really didn't care for this game. First, there..."