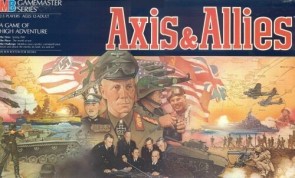 Up to five players can play on two different teams. The Axis which has Germany and Japan, and the Allies which has the USA, the United Kingdom, and the USSR.

A full map of the world is provided, broken up in various chunks similar to Risk. The game comes with gobs of plastic miniatures that represent various military units during WWII. Players have at their disposal infantry, armor, fighters, bombers, battleships, aircraft carriers, submarines, troop transports, anti-air guns, and factories. All of the units perform differently and many have special functions. Players have to work together with their teammates in order to coordinate offenses and decide how best to utilize their production points. Players also have the option of risking production resources on the possibility of developing a super technology that might turn the tide of war.

April 02, 2020
Rating
2.0
This was fun to play a few times, but the scripted nature of the play and the loooong play time just isn't for me nowadays.
MT
Matt Thrower
Comments (0) |
April 19, 2019 (Updated: April 19, 2019)
Rating
1.0
I deeply and profoundly dislike this game. But it was one of my introductions to more complex games and wargames particularly. I won't be playing it again and will actively turn down games of it. I imagine how many wargamers it has nipped in the bud with its ponderous, rich-get-richer, over-in-two-turns but sitting for 8 more hours, nature and it hurts my heart.
GS
Gary Sax Top 10 Reviewer 101 reviews
Comments (0) |

5 stars
(1)
4 stars
(4)
3 stars
(5)
2 stars
(0)
1 star
(1)
Already have an account? Log in now or Create an account
View all reviews
July 27, 2008
Rating
5.0
If I had to objectively evaluate this game, it would get murdered. Luckily, I'm not objective, and I love it. It has so many problems but has so much charm...
J
Johnny Top 100 Reviewer 1 reviews
Comments (0) | Was this review helpful to you? 1 0
July 29, 2008
Rating
4.0
One of the games I played the most growing up. Yes it's long, but what are we? A bunch of euro-weenies? Man up and pass the IPCs! A great game for kids (grade school-college) or deployed military personnel with lots of time on their hands, the urge to kill little plastic army men, and a lust for the thrill of rolling fist fulls of dice. The only real drawback to me, is that I've become convinced the Allies are unbeatable if used properly, even with the included optional rules for helping out the Axis. Still, most people have no idea of the optimum Allied strategy, so if I'm in a game, I'll just play the Axis and try to beat the odds. A much different feel between 2 player and multiplayer games. 2 player you have much more control. 3-5 players you have the wheeling and dealing which is fun but the downtime is a lot greater.
DD
dan daly Top 100 Reviewer 5 reviews
Comments (0) | Was this review helpful to you? 0 0
July 30, 2008
Rating
4.0
One of my original board games that I played throughout high school. Pacing is kinda screwy, and we never really played with the economic victory conditions either, so games rarely ended, but rather we conceded when all seemed hopeless. I know many others complain about things being predetermined after the first few turns, and maybe we were just to retarded to see the writing on the wall, but it seemed like EVERY time someone would try SOMETHING new and it kept us entertained. And, along with Risk, this helped me learn my geography!
S
Ska_baron Top 50 Reviewer 20 reviews
Comments (0) | Was this review helpful to you? 0 0
September 26, 2008
Rating
4.0
When I used to be into this game, I originally thought of it as Risk for adults. Now, I think Twilight Struggle fills that gap far better. I have some fond memories of Axis and Allies and many not-so-fond ones. Could that set-up time be any longer?! I remember starting to play it on PC just to avoid the set-up and that's where I realized how average this game really is.

This game is UNPLAYABLE with anyone that suffers from Analysis Paralysis (*looks in mirror* **waves back**). There are so many decision tree points in this game that I really gotta think. In the end, I forced myself to only play as Russia cuz the decisions were easier.

I tend to be a bit of a gaming judge as well (I don't know why, it's just natural) so many times during games I become suspicious that a player removed or did not remove enough units during a battle. This stuff drives me nuts.

And once again (as in my review of Settlers of Catan), you can easily find better games that have the same mechanics and same themes as this one:

The one aspect I LOVE about Axis and Allies is the economics. I LOVE economic themed games. But of course, the Euros always handle this better. Both Agricola AND Puerto Rico have more fun economic-themed gameplay. Heck, Power Grid and Caylus as well.

Axis and Allies does many things good but is not excellent in ANYTHING. And for that, I'm happy I gave away my copy of the game (never been played) to my brother-in-law.
BB
Black Barney Top 50 Reviewer 16 reviews
Comments (0) | Was this review helpful to you? 0 0
October 29, 2019
Rating
4.0
WE played this and the Xeno Game's Version so many times in middle school and High School that we could set it up from memory. I'll admit that there is no chance it will hit the table these days, but I have very fond memorys of playing with my dad and friends.
E
edulis Top 50 Reviewer 5 reviews
Comments (0) | Was this review helpful to you? 0 0
View all user reviews
Discuss this article
Log in to comment
Posts in discussion: Axis and Allies