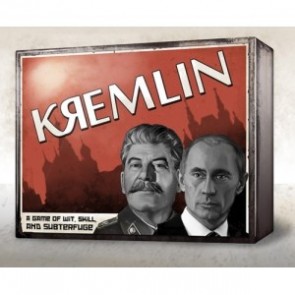 A game of political intrigue set in the Soviet Politburo. Players secretly influence politicians, using them to exile other players politicians, promote their own or wheel and deal.

Journey to Moscow to experience first-hand a humorous, behind-the-scenes look at the intrigue, double-dealing, bask-stabbing, and outright paranoia that has characterized the Soviet Politburo throughout history in a delightful, satirical study of power politics in its rawest form.

Originally released by Fata Morgana in the 1980s, Kremlin is a European-style board game where players compete to control the Communist Party of the Soviet Union. Kremlin is played for up to ten turns, ending as soon as the Party Chief successfully waves three times at the May Day Parade or when so many politicians are dead or in Siberia that the Party Chief can disband the Politburo and take complete power for himself.

Featuring updated art and premium components created in the style of 1930s Soviet poster propaganda, this Jolly Roger Games edition of Kremlin includes three ways to play: the classic version based on the original Fata Morgana rules; a version inspired by the Avalon Hill variant titled Revolution set in the 1920s that uses both historical and fictional politicians; and a new, revised version set in the modern USSR and Russia, an era of entrenched bureaucracy and alternatives for escaping KGB persecution.