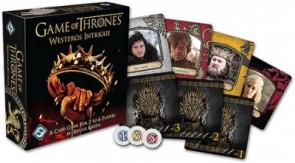 Test your guile and wit and battle for the fate of the Seven Kingdoms in Westeros Intrigue, Fantasy Flight's card game of courtly maneuvering and backbiting based on HBO's Game of Thrones series.

The royal court of Westeros is filled with intrigue as nobles, knights, and courtiers scheme and plot to determine the future of the Seven Kingdoms. By playing your cards cleverly and looking ahead, you’ll be able to plan your own path to the Iron Throne in Game of Thrones: Westeros Intrigue.

Game of Thrones: Westeros Intrigue is a fast-paced game of cards and intrigue at court, created by renowned game designer Reiner Knizia. Every game is played over a series of rounds, as you and your opponents play character cards in an attempt to claim the Iron Throne for yourselves.

The royal court at King’s Landing can be treacherous, and you’ll need foresight and clever play to end up on top. Only by outwitting the opposition can you gain control of the royal court. Test your guile and your wit in Game of Thrones: Westeros Intrigue and battle for the fate of Westeros!

Cleopatra and the Society of Architects
2.0
SI Spanish Inquisition
"This game was cool the first time. I love..."