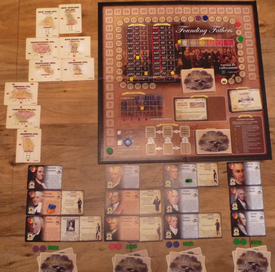 The previously PnP-only game of early American politics is now available in glorious color from The Game Crafter.

Founding Fathers is a game of the early American republic. Play begins with George Washington as president and John Adams as vice president. Also present are Benjamin Franklin, Patrick Henry, Thomas Jefferson, Alexander Hamilton, James Madison and Aaron Burr. Each player controls several such statesmen, and those who will appear later, up through the arrival of Abraham Lincoln. Together the players try to solve the issues faced by the young republic – wars, debt, financial panics, the growth of the Union, north-south division, and more. Every four years the most popular politicians from each party square off to see who becomes the next president. Players look out for their own interests, but must not neglect too much the needs of the Union as it can falter altogether, from multiple causes. At the same time, players control statesmen from both parties and multiple states, providing ample opportunity for logrolling, mutual backscratching and strange bedfellows. 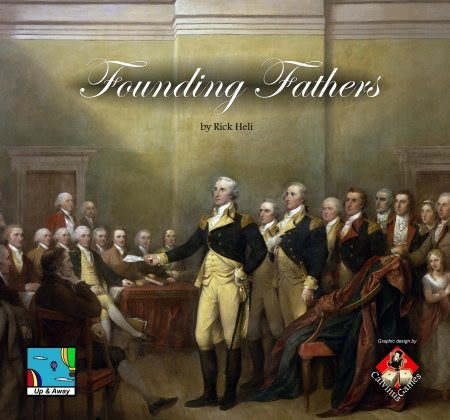 For the first time it's possible to order a complete Founding Fathers game! This edition features a sumptuously gorgeous new graphic design by noted game artist Luca Cammisa (partly inspired by the earlier excellent contributions of Thomas Heaney). This edition has everything: board, cards, bits ... even a box. To ensure you have the complete early American experience, there are

“If you like Republic of Rome, but need something with a lower barrier to entry, give this a go. Half the rules, all the backstabbing. ”
~ Alex Ringgaard
Tweet

Rating
5.0
Already have an account? Log in now or Create an account
October 17, 2019
Rating
5.0
U
upandaway Top 100 Reviewer 1 reviews
Comments (0) | Was this review helpful to you? 0 0
Discuss this article
Log in to comment
Posts in discussion: Founding Fathers -- a politics and negotiation game

KingPut replied the topic: #323466 26 May 2021 12:47
I know this is an old thread but with the announcement of Athens: The Birth of the Politics, I discovered this thread. I've played Founding Fathers by Rick Heli 4 times. I much preferred Founding Fathers over Republic of Rome or new Athens: The Birth of Politics (which I play tested so I'm not sure of the final version). All these games are epic length games 6+ hours and they are more enjoyable with 5-6 players. While you could set limits to reduce the debates and scheming that's also where these games shine.
Read More...

City of Remnants
2.0
L Legomancer
"I read a review of this that sounded good and..."

Last Night on Earth: The Zombie Game
5.0
B bfkiller
"It's not challenging. It's not complicated. It's not..."