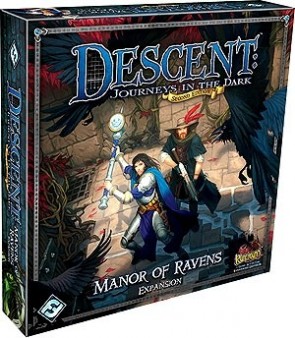 Dangerous secrets lurk in the dark recesses of Manor of Ravens, the latest expansion for Fantasy Flight's Descent: Journeys in the Dark 2nd Edition.

In the foothills near Greyhaven there sits a forgotten manor, the haunted residence of the late high mage Ithyndrus. Antique trinkets and artifacts lie within its ever-changing walls, but the ravens that watch the manor are insufficient to discourage treasure hunters and bandits. A new guardian has awoken, and dark forces gather to his aid. Left unchecked, the power and size of this creature will never stop expanding. Its potential is limitless, and it must be stopped!

An expansion for Descent: Journeys in the Dark Second Edition, the heroes in Manor of Ravens must travel to an abandoned manor house to destroy the terrifying guardian that gathers power within the house’s walls. Along the way, they will face deadly danger, and if the house itself comes awake, can any hero hope to survive?

Introducing new monsters, heroes, classes, and items, alongside a new mini-campaign, Manor of Ravens will lead you into entirely new adventures.

The overlord finds plenty of new tricks, including brand-new Overlord classes, relics, and two new monster groups (bandits and wraiths). A new lieutenant also enters the scene as the heroes attempt to investigate the manor house. Skarn is a magical construct, composed of pieces of the manor house and possessed of limitless potential.

Hero players will find new additions to their hero parties in Manor of Ravens as two new heroes step forward to offer their aid in your quests. Alys Raine offers her love of righteous justice to anyone seeking a Warrior for a quest. Thaiden Mistpeak, on the other hand, brings an eerie knack for tracking and hunting, using his skills as a Scout to pursue his quarry across the realm of Terrinoth. Heroes will also discover two new hero classes in this expansion. Warriors can devote themselves to upholding the justice of the realm by taking on the Marshal class, making the overlord pay for any injustice. Scouts, on the other hand, may find it more to their taste to become a Bounty Hunter, tracking one monster until it falls beneath their blades.

Dangerous secrets and a guardian with limitless potential lurk in the dark recesses of this haunted manor house. Will you venture within to save all of Terrinoth?

Dungeoneer: Tomb of the Lich Lord
4.0
J joseaguerof
"I used to play this game all the time with..."