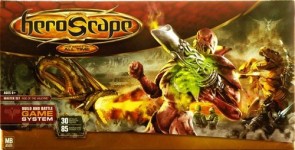 This Fantasy Battle Board Game comes with dozens of painted plastic miniatures, each representing a warrior from a different era, and hex-based hard plastic terrain pieces which can be put together in many different ways. The warriors include 30 plastic figures, including World War II soldiers, futuristic robots, aliens, a T-Rex-riding orc, a large dragon, and many more. Each hero or squad has its own card that details both movement and combat abilities.

Perfect Game?
March 19, 2020
Rating
5.0
Essentially a perfect game. I'm not just talking gameplay -- I'm talking the entire execution of the product. This is a game designed to appeal to ages 3 through 100, has magnificent components that are designed to be brutalized by small children with little or no damage resulting, and to appeal to all on three levels -- building, role-playing, and competing. Nothing in the marketplace is at the same level as Heroscape from an overall packaging perspective.

Available for $18US for a period of time, I simply don't think any other game has ever provided this level of value at this price point. Or even close. None ever will again, because the nature of the World's economy has fundamentally changed. The door has closed on this level of material for that kind of price.

Fun game. Great for boys between five and ninety-five. I've played the advanced rules with my five-year-old twins. A bit of patience was required, but they had fun. The big pieces make for an impressive look and feel which is not lost on kids. Many expansions -- you [i]could[/i] drop a few buckazoids on this critter, but you don't [i]have[/i] to. Requires a bit of time and space to set it up, but once it's there it is positively glorious. The quality of the components is simply magnificent -- gorgeous AND tough.

My kids love all aspects of it -- playing pretend, setting up the boards like a puzzle, playing. This is THE game for young boys of this generation to own. This is the one they'll talk about with each other on the golf course fifty years from now.

This basic set is the one to go for -- nice variety of pieces and plenty to play with -- you need never buy an expansion. Simple rules means thirty minutes to master the concepts, then you can play for hours. Short quick battles, huge drawn-out campaigns . . . anything is possible given the modularity and variability of the pieces and their basic concepts.

Simply the best birthday present you'll ever give a seven-year-old boy. If you see this grab two copies -- you'll likely have grandsons someday.

2. This is the game your boy will have set up for a game when you get home from work.

3. This is the game your boy will go to first under the Christmas tree.

4. This is the game your boy will drive 300 miles to retrieve when you tell him that you're breaking up the house and moving to Florida.

5. This is the game that will take your boy from childish let's-play-pretend games with toy dinosaurs into the world of legitimate competition and tactical decision making on an open field of battle.

6 This is the game that YOU will enjoy playing with him, that will give the two of you common ground, that will help your relationship grow.

There's also something exceptionally satisfying in dropping Mimring in round one.

UPDATE: I've raised my score on this one due to the number of whoopin' 'n hollerin' knock-down drag-out wars we've had. The combat system is fast and simple, you don't have to paint the minis, and the terrain is fab. No two games have ever been alike and the last one we played (a 500 points/side three-way slug-fest) ended with a single character with a single hit point left on the field. Can't recommend this one enough!

GOLDEN KID-QUOTE: "Why are we fighting each other? Why aren't we all fighting the guy who brought us here?"
H
HiveGod Top 50 Reviewer 54 reviews
Comments (0) | Was this review helpful to you? 1 0
Ninjas vs. Robots vs. Vikings
July 29, 2008 (Updated: July 31, 2008)
Rating
5.0
A light and easy miniatures game enjoyable by gamers, causal gamers, and non-gamers (it's really great with younger casual gamers). What makes it cool is that it has fantasy things, the Men in Black, army dudes, robots, and samurai, ALL IN ONE!!! How cool is that? I could probably use my warhammer40k minis for this, too. The only bad thing about all the different kinds of dudes is that it doesn't feel like it has any specific theme, or that it's any real battle.

This game would be great for anyone who would like a miniature wargame that is light, easy, relativley short and inexpensive, and doesn't require arts and crafts skills (or if you just don't have the time for it, anymore).
A
Aarontu Top 50 Reviewer 25 reviews
Comments (0) | Was this review helpful to you? 0 0
A true stroke of mass market brilliance
July 29, 2008
Rating
5.0
A perfect blend of stripped-down battling goodness. Draft your guys, line 'em up, throw the bones. Build any sort of map you can think of, limited only by the number of master sets you own and your imagination.

It's one occasion that you're glad a mass-market company ran with something like this. Only they could have put this much plastic into such an affordable box and make it available pretty much everywhere.


It has a few faults--you'll wish for a little more meat after spending a lot of time with it, and there's no getting around the fact that the theme is pretty much "Eternal Champions" inspired naff.


But this is definitely a classic.
KB
Ken B. Top 10 Reviewer 83 reviews
Comments (0) | Was this review helpful to you? 0 0
Beware... Addictive Game Lurks Near
October 02, 2008
Rating
5.0
After a 10 year hiatus from any form of gaming, I fell off the wagon after I purchased the original master set from a local department store. Heroscape has become one of my favourite games and has been the cause of much fervour amongst thousands of gamers around the world.

- The ruleset and gameplay is relatively simple and dice driven.
- There is a background story to the game, but the story is not supported well by the game.
- There really is no set playing time but my guide would be 30 mins to 3 hours excluding set up time. It depends entirely on the size of your army.
- The armies and heroes are drawn from a patchwork quilt of genres both historical and fantastical.
- The strength and weaknesses of the armies vary greatly but the game is nevertheless quite well balanced.
- The plastic miniatures are of excellent quality and come prepainted.
- The landscape is Lego-like in concept allowing for customised battlefields limited only by your imagination (and size of your collection).
- The plastic landscape is durable and there is a great variety to choose from.
- The 3D battlefields look drop-dead gorgeous when set up and are guaranteed to draw people's attention.
- Setup time can vary depending on the complexity of your battlefield, but is largely considered to be a labour of love by fans of the game.
- There is a large number of expansions for the game and with the expansions, the game truly shines.
- Most of the earlier expansions are now out of print (rumours of reprints abound).
- Distribution outside of the U.S. is poor and it can be a costly exercise building up your collection.
- There is an excellent and dedicated online community supporting the game.
- There is a growing tournament scene in the U.S.

Is this a kid's game?
The game was marketed at kids but has proved unexpectedly popular with a large number of older gamers and for a multitude of reasons. The rights to the game were recently acquired by WOTC and I think the marketed demographic may change as a result. I wouldn't describe it as a kid's game. I would describe it as a relaxed and fun game. Serious, fun-loving murderers need not apply.

D
DeletedUser Top 100 Reviewer 1 reviews
Comments (0) | Was this review helpful to you? 0 0
View all user reviews
Discuss this article
Log in to comment
Posts in discussion: Heroscape

Descent: Journeys in the Dark
2.0
S Shellhead
"Like the Doom boardgame, Descent is a thematic but repetitive..."