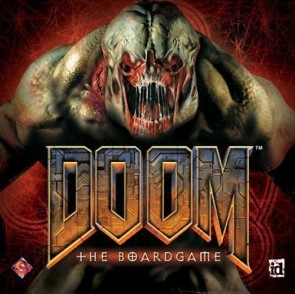 In Doom: The Boardgame, demonic invaders have broken through from another dimension into the Union Aerospace Corporation’s Mars base. Marines have been deployed to the base to protect UAC personnel and destroy the invaders. Up to three players will take the roles of heavily armed and highly trained marines, while one player will control the legion of demonic invaders. In the game, the marine players explore the claustrophobic rooms and corridors of the Mars base, attacking monsters, picking up new weapons and equipment, and working together to complete specific mission objectives.

The heart of Doom: The Boardgame is the scenario. Before every game, a scenario must be chosen. Each individual scenario will tell you how to set up the game, explain any special rules, and describe the specific objectives you must achieve in order to win the game. You will find several ready-to-play scenarios in the Doom Scenario Guide.

Doom: The Boardgame is a game for 2 to 4 players ages 12 and up, playable in 1 to 2 hours, based on the groundbreaking DOOM computer game by id Software.

5 stars
(2)
4 stars
(1)
3 stars
(1)
2 stars
(1)
1 star
(0)
Rating
3.8
Already have an account? Log in now or Create an account
If you can't stand the heat in the kitchen, get ou
September 22, 2008
Rating
5.0
This is a great game, that takes the solitary sci-fi premise of the video-game and turns it around, making it a cooperative dungeoncrawler agaisnt the evil Invader.
The game is quite simple to play, especially for the marines players, just move and shoot, but you can pick up items, guns and ammo as well as use different cards that can help you out.
Meanwhile the invader player is getting all of the fun, managing the ship and all it's critters against those pesky marines.
Be prepared to sweat it out, as this is a highly tactical game if you wish to make it out in one piece. Or if you're having some trouble with the difficulty download the handy mod the FFG chaps put on their site.
Anyways, it's a fun easy game that should be a follow-up to introducing people into the right side of the hobby.
J
joseaguerof Top 50 Reviewer 19 reviews
Comments (0) | Was this review helpful to you? 0 0
Fast paced killing
February 06, 2009
Rating
5.0
Has the feeling of Doom; they did a good job at capturing the feel of the game. May not be balanced, but that's alright because it's fun and the unbalance is thematic (the marines don't have to roleplay fear, they are actually afraid of something jumping out and killing them at any moment). The minis are very nice, too.

Rules-wise, it's very easy to learn or teach others, with not too much stuff the marines have to remember or keep track of. The dice combat is a simple and cool way to show damage, ammo usage, and range, all in one roll. Monster spawning is a bit gamey-feeling, but at least it makes more sense in DOOM than in DESCENT.
A
Aarontu Top 50 Reviewer 25 reviews
Comments (0) | Was this review helpful to you? 0 0
Goddamn lid won't stay shut...
August 20, 2008
Rating
4.0
A vicious dungeon-crawler, this is no walk in the park. There are some really great elements here, notably the incredible presentation and fun, efficient dice combat. The difficulty is maybe a bit too much, but I like the challenge it presents and it's simple enough to use some houserules or allow the GM some flexibility to allow an easier game.
B
bfkiller Top 50 Reviewer 14 reviews
Comments (0) | Was this review helpful to you? 0 0
Space Hulk Was Better
August 07, 2008
Rating
3.0
Doom: the Boardgame is a thematic but repetitive dicefest that offers only minimal tactical decisions. The special dice were cool, but overall the game felt less like Doom and more like a bland version of Space Hulk. I've played it just once, but would be willing to play again once in a while.
S
Shellhead Top 50 Reviewer 24 reviews
Comments (0) | Was this review helpful to you? 0 0
April 18, 2019
Rating
2.0
D
dysjunct Top 10 Reviewer 133 reviews
Comments (0) | Was this review helpful to you? 0 0
Discuss this article
Log in to comment
Posts in discussion: Doom: The Boardgame