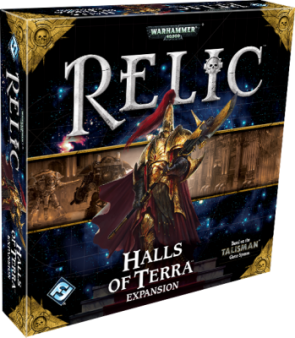 He stood in front of the massive, ancient, marble doors of the Sanctum Imperialis, feeling the pitiless gaze of the Adeptus Custodes penetrating him as he waited. He hoped that the rusted dents on his armor, the long scars across his face, and the token of the Inquisition’s support would attest to his piety and loyalty. He knew that what he was asking for – an audience with the God-Emperor – was a privilege unknown to any but the most dedicated and uncorrupted servants of the Imperium. He could only pray to be deemed worthy of it. At long last one of the guards approached and tonelessly spoke. “Your wish has been granted. You may enter the Eternity Gate and approach the Golden Throne.”

Fantasy Flight Games is proud to announce the upcoming release of Halls of Terra, a side board expansion for the Warhammer 40,000 board game, Relic.

The Antian Sector is on the brink of succumbing to heresy and Chaos. In Halls of Terra, your quest to save the Antian Sector takes you to mankind’s homeworld, where you must persuade the ruling powers of the Imperium to endorse you as an Imperial Champion. Not only the fate of the Antian Sector, but also your life and honor are at stake in your negotiations with the devout Adepta Sororitas, the ruthless Inquisition, the cold-blooded Adeptus Arbites, and even the God-Emperor himself. You’ll soon find that politics and diplomacy can prove as deadly as any battles inside the Warp Rift, and that corruption haunts even the Imperium’s capital.

Relic: Halls of Terra features a side board depicting locations in Holy Terra and nearby Mars. A new orange Threat deck brings these worlds to life and challenges players as they strive to gain affiliations and prove themselves worthy to appear before the God- Emperor. Three new characters and another terrifying Nemesis enter the game, while additional scenarios reshape the struggle against the forces of Chaos.

The Ancient Home of Humanity

The most sacred place in the entire Imperium is Holy Terra, the teeming birthplace of humanity and home of the immortal God-Emperor. An endless stream of pilgrims travels to Terra seeking merely to touch its sanctified soil, but you have much greater ambitions: to win the support of one of the Imperium’s governing organizations and with that support, enter the Sanctum Imperialis and seek the Emperor’s endorsement.

On your journey towards the Palace Gates, you’ll likely visit one of the satellites Titan or Luna. The former is home to the fortress-monastery of the secretive and uncorruptable Grey Knights, the latter is a Civilised World and major crossroads where you may use Cunning to win the favor of the Imperial Nobilty. You may also choose to visit the Forge World Mars, headquarters of the Adeptus Mechanicus whose arcane knowledge produces the technology that fuels the Imperium’s eternal war effort. Once on Terra you may face trial at the Halls of Judgement or discover the secrets of the Scholastia Psykana, the training center for the mysterious Adeptus Astra Telepathica. Then you may approach the fearsome Titanoliths that surround the Palace and the Adeptus Custodes who guard it. They only permit characters with the utmost Cunning, Willpower, or Strength to stand before the Senate and the God-Emperor, and therefore will challenge you in your best attribute.

War by Other Means

For every organization whose favor you earn in the Sol System, you’ll collect an affiliation token, but these are hard to win and easily lost. At least one affiliation is necessary merely to pass through the Palace Gates. The more affiliations you possess, the more likely you are to earn a Relic from the High Lords of Terra or the Emperor.

You may arrive on Terra thinking that political battles cannot possibly be as lethal as the bloody fights you have endured in the Antian Sector, but some Imperial powers will take your life if you fail to conquer them in a battle of Cunning, Willpower, or sheer brute Strength. Political battles may also yield military rewards. If you manage to enter the Sanctum Imperialis and lay eyes upon the immortal God-Emperor, he will name you a Champion of one of the Imperial powers, such as the Adepta Sororitas, and grant you a lasting advantage in the ongoing war against Chaos.

Even in the Sol system, the holiest part of the Imperium, you can encounter corruption and heresy. A False Pilgrim may be attempting to hide among the hordes of religious devotees, or you may meet a Fugitive Witch on the crowded streets. The Inquisition itself could even question your innocence, forcing you to use Cunning to convince them of your piety. Indeed, some citizens of the Imperium thrive on corruption, manipulating it in order to achieve their own ends. The darkly pragmatic House Belisarius Navigator, a member of the Imperial Nobility, accumulates Corruption easily and even has some immunity against it. Her character abilities allow her to both exchange Corruption cards for movement points and decide when certain Corruption cards activate. So, although constantly welcoming Corruption, she nevertheless may keep her mind and body pious and pristine.

Any taint of corruption is so unwelcome in Terra that you may be given a mission to root out corruption and combat it. The Cleanse Holy Terra mission charges its bearer to eradicate any unclean souls who have violated the sanctity of the Sol System. The rewards is not only a completed mission, but also affiliation with the Inquisition. You might even please the Emperor and gain the Adeptus Arbites affiliation by revealing another character’s apostasy or corruption. If you are already affiliated with the Adeptus Arbites, you can force the corrupt character to lose an affiliation – or two lives.

A visit to Terra is no secure undertaking. You may lose your life attempting to win over the Adeptus Astra Telepathica, or become a victim in the Inquisition’s merciless war on heresy. But with the support of the High Lords of Terra or the God-Emperor, you will be far better equipped to conquer the horrors of the Antian Sector and triumph in the ultimate confrontation with Chaos.

The voyage to the Sol System begins in the second quarter of 2015. Stay tuned for upcoming previews of the dangers and rewards that await you on Holy Terra.

Relic is a board game in which two to four players each assume the role of a powerful hero from the Warhammer 40,000 universe and bravely venture forth to shield the Antian Sector from certain doom. By completing missions and defeating enemies, characters compete to gain rewards and experience, furthering their chance of being the first to defeat whatever evil lies beyond the Warp rift.

Prophecy
3.5
H HiveGod
"I like the general feel of this fantasy world, as..."