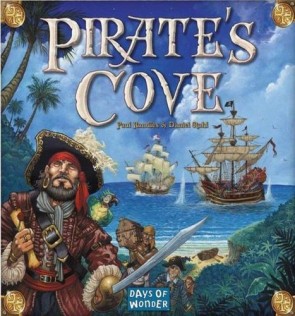 Take to the high seas in search of plunder and fame!

As the Captain of your own pirate ship, explore dangerous islands, bury treasure, fight the Royal Navy, and brag about it all at the Tavern to your fellow buccaneers. At the end of your voyage, youll either be doing time in Davy Jones locker, or youll be the most feared reaver on the High Seas.

Pirates Cove is a fantastic family game that brings a mix of adventure and resource management to game nights. Every player can modify their ship as they visit the various islands, with each facet of the ship being important to overall game-play. Your basic goal is to attain the greatest fame over a number of turns that evokes a twelve-month period. By burying treasure, winning battles, and bragging about your feats in the Tavern, you attain greater and greater fame, but fame also draws greater threats to you from both other players and other famous pirates.

5 stars
(2)
4 stars
(2)
3 stars
(1)
2 stars
(0)
1 star
(0)
Rating
4.1
Already have an account? Log in now or Create an account
Pirate's Cove: Lots of fun on the high seas...
August 07, 2008
Rating
5.0
Pirate's Cove kinda represents Days of Wonder in their heydey. This game is great family fun and really does a great job of evoking its theme. Fairly simple, a ton of fun just to hang with people and play, this game is highly engaging and will set up a very enjoyable game night, regardless of who you want to have over.

A true *gateway* game to be sure; with maybe a little more complexity.
RB
Ryan B. Top 50 Reviewer 13 reviews
Comments (0) | Was this review helpful to you? 0 0
Perfect blend of a lot of great gaming elements
October 22, 2008
Rating
5.0
It kills me that I'm one of the few fans of Pirate's Cove on the editor's staff. Let's review:


1. Pirate theme. Yeah, it's played out, but it's still cooler than Kingly ass-kissing.

2. Building up your ship. Maybe you're not building up a character RPG style, but tweaking your ship affects how well you fight and how much treasure you can hold. Just light enough for casual gamers to handle but some customization for the ATer as well.

3. Cards. The cards have crazy wild differences in power but all of them have the flavor of the best AT games. Surprise your foe by chucking a fistful of dice for one round. Upgrade your ship. Get a parrot with stupidly powerful abilities. Hinder your foes by sending the Royal Navy after them. Good times.

4. Dice-based combat. Uh...duh? Feels GOOD to shred your opponent's bow by unloading your cannons on them. Sink, bitch!

5. And...uh...yeah, VP. But at least you get VP for blowing up boats and finding treasure, not "plotting the best building for with the master mason is very impressed and allows you to kiss his ring."

Go buy this game. Set it up for your friends. Try to make it through without making stupid pirate noises. If some part of this game doesn't appeal to you, you are dead inside and need to question your AT credentials.

Anyway, Pirate's Cove of course has great components (it is a Days of Wonder game after all); the map is gorgeous, the ship sculpts are great, the cards have really fun illustrations on them.

Game play is alright. You get to outfit your ship how you want it: lots of crew, lots of gun, make it fast, make it hold lots of stuff, any combination. Each round you secretly choose which island you want to visit. A card is dealt face up on each island depicting how much treasure is available or other benefits. Each island also has a unique upgrade ability: buy more crew, upgrade cannons, upgrade your hull, etc. If you and another pirate ship end up on the same island a fight erupts. Combat is pretty plain though. Also there is a legendary pirate that roams the seas. His paths follow a pattern so you can dare to take him on if you want. To score points you haul your treasure to the center island and bury it there.

The unofficial subtitle for this game is "Guess Wrong & Fight!" It's best to avoid everyone as the loser of a sea battle tends to get hammered into an irrevocable last place. On the surface this would seem to be anti-piratey but in reality it's probably accurate—skulking around avoiding "fair" fights while preying on the weak.

It is terribly annoying, though, as the winner gets more and more powerful and goes over the horizon into the sunset.