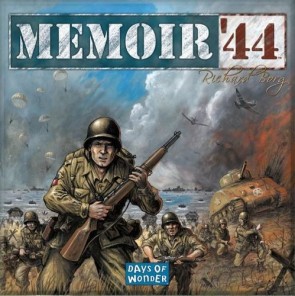 From the cliffs of Pointe-du-Hoc to the hedgerow battles in the Corentin Peninsula and beyond -- Memoir '44 airdrops you into the key battles that turned the tide in Western Europe during the summer of 1944.

Omaha Beach, Pegasus Bridge, Operation Cobra... Step in and command your troops on the battlefields that defined History in the 20th century! Memoir '44 is a unique historical game where players command a horde of little plastic Army men facing-off in dozens of WWII battles on an oversize hex game board. Each battle scenario mimics the historical terrain, troop placements and objectives of each army. Deploying forces through a variety of Command cards, the smart commander uses the unique skills of his units -- infantry, paratroopers, tanks, artillery, commandos and resistance fighters -- to its greatest strength. Easy to learn and fast-paced, Memoir '44 requires strategic card play, timely dice rolling and an aggressive, yet flexible battle plan to achieve victory!

December 15, 2020
Rating
2.0
Others love this thing, and I respect that, the core Berg engine is pretty good. But this is way too spare and devoid of chrome for me, even moreso than the CC:A iteration.
GS
Gary Sax Top 10 Reviewer 101 reviews
Comments (0) |


Memoir is one of those games you can get anyone who has even a remote borderline interest in conflict games to play--and a lot of times you can get people *not* interested in that sort of thing to play it anyway (note how BGG embraced it, even in the early days.)


It could use more depth from a base game level, but the combat is fast and fun. You'll curse your luck with drawing cards you don't need, but chalk that up to the vagaries of communication on the battlefield.


A great game that doesn't really see as much play as it should, but this is a fantastic design.

KB
Ken B. Top 10 Reviewer 83 reviews
Comments (0) | Was this review helpful to you? 1 0
More BUDDA-BUDDA, BAM! & BLANG! than Milsim
August 15, 2019
Rating
5.0
Gets me in a way that Battle Cry could not, as I lack the American Civil War gene. The game engine is excellent—a beer-n-pretzels wargame for those of us who are not hardcore wargamers. Yeah, it's just playin' with plastic army men. But sometimes that's all you need.

After 40 plays: I suppose I must bump this to 4.5 stars; my interest is only accelerating and as a game system there is just so much to love here. And while it might seem like a "heavily-themed abstract" the sheer number of units, options, and scenarios makes every game unique.

Almost every scenario is wildly imbalanced (a nod to history), making any single play unsatisfying for someone; but when you consider a single match to be two games with the victor having the highest total medal count after playing both the favorite and the underdog, well, then the experience is very satisfying indeed. As the favorite you want to run that steamroller to victory as quickly as possible and minimize the underdog's score; as the underdog you want to simply last as long as possible and rack up as many medals as you can before you're snuffed. On the odd occasion when the underdog actually wins? Then it's time to dance around the table and flick infantry units at the loser.

Hand management, probability, and the sequencing of attacks are all neat puzzles that keep each turn interesting, even when you're the one getting pounded. And the whole time the setup just looks gorgeous.

There are more scenarios than I can probably get through in a lifetime... though I'll give it my best shot!

After 86 plays: It's 5 stars, earned the hard way—through ever-increasing game-pleasure. The best scenarios from the expansions are engaging puzzles that not only bear repeat play, but unfold before you into larger and larger possibility spaces the more experience you get with them. Some feel as if you could play them endlessly without ever becoming bored*—the static setup is a puzzle that requires a dynamic solution, depending wholly on the interaction between how the cards come out, hedging dice probabilities, and your creativity in manipulating it all. Grinding the same scenario over and over is less about finding the optimal path (and solving it for all time) than it is about finding the way through the unique iteration right in front of you, right now.

*Yes, I know this isn't true—but the subjective sensation of infinite fun propels me onward. Besides, should I be so lucky as to actually "wear one out" there are only a couple hundred more to dig into...
H
HiveGod Top 50 Reviewer 54 reviews
Comments (0) | Was this review helpful to you? 1 0
Toy Soldiers
August 21, 2008 (Updated: August 21, 2008)
Rating
5.0
Did you ever play with little plastic soldiers when you were a kid? This game brings me right back to the sandbox with beautiful plastic soldiers, tanks, artillery and more! Setting up the scenarios with landscape and obstacles and huge squadrons of soldiers is a big part of the fun.

Players draw cards that allow different movements on different parts of the map. Lots of dice with cool little military symbols painted on. Strategy, luck, victory, death, it's all there.

Often it feels as if perhaps the luck factor is more important than the strategy, but hey that's war, isn't it?