Cleopatra and the Society of Architects 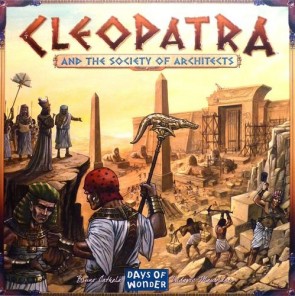 The object of the game is to become the wealthiest of Cleopatra's architects, by constructing the most magnificent and valuable parts of her Palace.

Given the intense competition that reigns among the members of the Society of Architects, you will often be tempted to deal with shady characters and trade in materials of dubious origins.

While these corrupt practices may indeed allow you to stay a step ahead of the pack, they come at a heavy price: Cursed corruption amulets honoring Sobek, the Crocodile-god, which are stored inside your Pyramid of Corruption, hidden from the preying eyes of your competitors.

When Cleopatra finally strolls into her new Palace, at the end of the game, the most corrupt architect (the one with the most amulets) will be seized and offered to her sacred crocodile as a tasty morsel! Only then will the wealthiest architect, from among those still alive, be selected and declared winner of the game.

5 stars
(0)
4 stars
(2)
3 stars
(2)
2 stars
(1)
1 star
(0)
Rating
3.0
Already have an account? Log in now or Create an account
Cleopatra and the Society of Component Overkill
August 07, 2008
Rating
4.0
I actually enjoy Cleopatra as a game and think it has some interesting mechanics with some nice game play potential. But mechanics do not solely make up a game. Does the game lack soul? I do hate that the box is used as a component of the game, so your game box now takes increased wear. That not nice for keeping the game nice. But the cardinal sin of this game, in my opinion, is the components. Yes, there are a ton of people that think they are cool. But logistically it makes it very difficult to play the game. It just takes up too much room and it is sometimes hard to see over all of the pieces.
RB
Ryan B. Top 50 Reviewer 13 reviews
Comments (0) | Was this review helpful to you? 0 0
DAT ASP
July 31, 2019
Rating
3.5
A mish-mash of mechanics (set collection cardplay, blind bidding, and a teensy bit of Tetris, among others) held together by an engaging theme and over-the-top production values. It really shouldn't work, but when played as a lighter, almost party-style game (i.e., social above all) it works brilliantly.

Corruption is the fastest way to victory points—and into the crocodile's gullet! For me the most engaging part of the game is the balance between greed (racing ahead via corruption) and trying to position yourself just enough to eke out a win. You don't need to be the least corrupt or the richest to win—you just need to be one unit less corrupt than the worst player and a single Talent ahead of everyone who's left. Really feels like walking a tightrope over a croc pit.