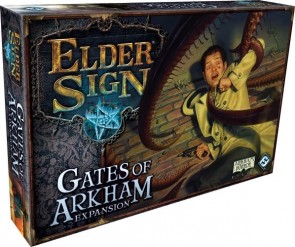 From its colonial-era founding, Arkham has been a refuge for witches and criminals, and legends suggest that since prehistoric times it has been home to some of the darkest forces imaginable. The turrets of Victorian homes, classical facades of Miskatonic University buildings, and tall booths of Velma’s Diner concealed inhuman horrors long before monsters came alive inside the museum.

Gates of Arkham, the second expansion for Elder Sign, takes the struggle against the Ancient Ones out of the museum and into Arkham, where monsters lurk in darkened alleyways and bystanders become the victims of gang rivalries. In the featured Streets of Arkham game mode, new Arkham Adventures and Mythos decks replace the original Adventure and Mythos decks, sending investigators on adventures throughout the city as four new Ancient Ones threaten to arise. Only by braving the city’s ubiquitous perils can you triumph against the ancient and awakening evil.

Gates of Arkham introduces four Ancient Ones who tear at the fabric of space and time as they begin to awaken. One of them is Atlach-Nacha, who is stirring in his transdimensional home and beginning to weave the worlds together, tugging at time and space, sapping the investigators’ sanity and stamina, and causing gates to Other Worlds to open across the city. Gates tie specific locations to Other Worlds, perhaps linking the Miskatonic Library to the Far Side of the Moon, or Velma’s Diner to the cavernous, underworld Vaults of Zin. You cannot visit a location that has a gate without slipping through to the Other World, and you must resolve the Other World adventure in order to seal the gate and return to Arkham. The more open gates in play, the more monsters spawn, and the faster doom approaches.

You never know who or what you’ll encounter among Arkham’s crumbling buildings, desolate squares, and unlit roads. At any moment a tentacle could reach out for you. Around any corner may be the entrance to some Other World. As you scour the city for elder signs, you could become involved in criminal rivalries or clandestine rituals, arrested by the police. or lost in the halls of an insane asylum. Only one thing is certain: the Ancient One is regaining strength, and it is up to you and your fellow investigators to save not just the museum, but Arkham and the entire world.

It will take all the resources, strength, and sanity you can muster to prevent the Ancient Ones from awakening – and to stay alive in the rough streets of Arkham.

SuperflyPete replied the topic: #197742 16 Feb 2015 01:21
Does anyone care to opine on adding expansion material to the base game? I could go get a review, but I don't want to taint any review that I might write down the road.

So, opinions on what they do for the game?

VonTush replied the topic: #197766 16 Feb 2015 11:08
Played it Sat night with the wife:
It is a new way to play and a lot of the extra stuff is more tuned for this variant. I felt like there were more things to consider on a turn which was nice. And we didn't even get half the Elder Signs needed before the GOO woke, but we smacked it down pretty good.

hotseatgames replied the topic: #197768 16 Feb 2015 11:34
I don't have the new expansion yet, but the first expansion is mostly just more of the same, with some different success / fail effects. You can now get cursed or blessed, which affects your dice odds a bit. If you like Elder Sign there is no reason you wouldn't want the first expansion. This new one seems awesome too, and I'll definitely get it at some point.

VonTush replied the topic: #197771 16 Feb 2015 11:48
Unseen Forces is a great expansion if you like the base game but just want more.
Gates of Arkham is a great expansion if you don't mind the base mechanics but feel like the game is almost but not quite there or if you want something a little bit different. (Also, you know it's gonna be good with Mr. Steve "MIA" Avery listed as a play-tester).

hotseatgames wrote: I don't have the new expansion yet, but the first expansion is mostly just more of the same, with some different success / fail effects. You can now get cursed or blessed, which affects your dice odds a bit.

Unseen Forces (the first expansion) also has a handful of replacement cards for adventures/characters, and some light rules changes. One important change: Players can't purchase Elder Signs. (Originally you can buy them for 10 monster tokens.) However, when purchasing stuff, you can purchase two things at a time instead of one (e.g., two unique items, one unique and one common item). The curse/blessing dice are also fun.

When playing, we always use Unseen Forces. I look forward to trying the new expansion (Gates).

JEM replied the topic: #197909 18 Feb 2015 07:40
This came in the post yesterday, so we played it last night. I expect we got a few rules wrong, but I really enjoyed it. It does play differently than the museum game. Buying stuff is harder, and involves committing to a location adventure. You'd love an ally, but it's on a red-backed location. Or you'd like to tackle that green adventure, but it has an item for sale that you can't afford- should you leave it for the other players? Once you flip the card, you lose the chance to buy anything. The clock spins a lot faster in this game, but doesn't seem to cause any real disasters. Most bad At Midnight effects we saw were on the backs of adventures, so just flipping the cards negates them, even if you fail the adventure itself. Skills, spells and items you can use on other players' turns, the memberships, add a lot of tools for you to play with.

We played against one of the GOOs that opens lots of gates on the doom track, so we had a lot of Other World adventures. Then of course a Mythos card hit anyone who had Other World trophies for 1 St/Sa... and the next one removed all trophies from all investigators.

I felt there was an ebb and flow to the game that wasn't there before, and the sense of location, even if still abstract, was nicely thematic. I can imagine the poker players not liking it quite as much, because you can't calculate the odds for each adventure until it's revealed*, but as a tentacle adventure, I really enjoyed it. I'm looking forward to playing again tonight.

*maybe they will. Unknowns are an element of risk management.
Read More...

Pandemic
4.0
A Aarontu
"A co-op game that is fun and relatively easy to..."