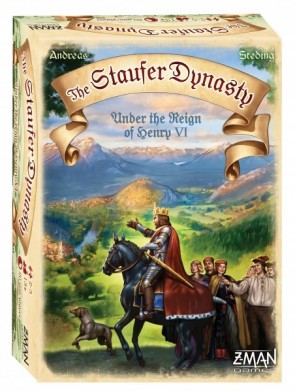 The Staufer family proved itself a great dynasty in the 12th and 13th centuries, as it produced several Roman-German kings and emperors. The most famous of these was Duke Frederick I, also called Barbarossa for the redness of his beard. Yet, it was his son, Henry VI, who was crowned and succeeded in expanding the family's empire. Because of him, this great empire stretched from the North and Baltic seas all the way to Sicily in southern Italy. You travel with Henry VI throughout his realm. With skill and foresight, you and your entourage strive to hold the reins of power, which in turn provide exciting benefits. If you can keep your opponents at bay, you might become an influential prince. Go and make history, relegating your rivals to the footnotes!