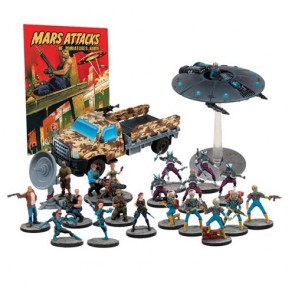 The Martians are heavily reinforced with specialists and air support as they push forwards to grind humanity under their boots. But the invaders aren't having it all their own way. The mysterious Novas Vira have arrived to rally the survivors and help them in taking the fight back to the Martians, bringing exotic weaponry and equipment to even the balance. With both sides bringing new weapons and tactics to the conflict, things can only get uglier!

With Mars Attacks: The Miniatures Game, one player controls the might of the Martian Empire's vast army of invaders and the other the brave defenders of Earth, battling against impossible odds. Will you persevere with your human forces in a desperate bid to push back the Martians, or will you guide General Tor to his ultimate objective and uncover the leader of the Novas Vira? Only you will decide the fate of the planet!