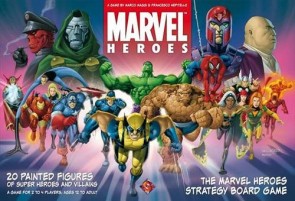 The heroes of the Marvel universe come to life in MARVEL HEROES: the Board Game!

Thwarting robberies, solving mysteries, and rescuing citizens from danger are all in a day's work for members of the Avengers, the Fantastic Four, the X-Men, and the Marvel Knights

... unless there's a super villain involved!

In MARVEL HEROES, 2-4 players each take on the role of a popular super-team straight from the pages of Marvel comics, including such well-known heroes as Spider-Man, Wolverine, Captain America, and the Fantastic Four. Simultaneously, they take the role of an evil Mastermind, whether it's the Kingpin of Crime, Dr. Doom, the Red Skull, or the mutant terrorist Magneto. They will fight crime and progress their story as super heroes, and work to complete their villainous plans as Masterminds, all competing to be the most successful at both tasks.

The action unfolds in New York City, on an impressively detailed and accuratemap depicting Manhattan Island as well as Brooklyn and Queens. Players will respond to dangerous and crimnal events, represented by Headlines, that crop up across the city, sending members of their super hero team to rescue citizens, fight crime, and battle super villains. Meanwhile, the dastardly Masterminds work to their own purposes - and especially to defeat their Nemesis super-team!

5 stars
(2)
4 stars
(0)
3 stars
(0)
2 stars
(1)
1 star
(0)
Rating
4.0
Already have an account? Log in now or Create an account
yes, I like Marvel Heroes
August 13, 2008
Rating
5.0
It's not perfect, it is 'overly designed' but it's the best super hero game I've played. Yeah, that's right Barnes, the best. It's got great, prepainted figures and packs one hell of a punch in its combat system. It's probably my favorite combat system out of any game. I wish more adventure games would mirror it in their designs.

Also, it plays in two hours or less and plays great with 2-3 players (it plays up to 4 but I've never played a 4-player game).

It's got its detractors. I don't think it was the super hero game everybody was looking for, but it's one of my favorites.
M
metalface13 Top 50 Reviewer 16 reviews
Comments (0) | Was this review helpful to you? 0 0
the beat up kid
June 02, 2009
Rating
5.0
I was weary about playing this game, I've read so much about it's clunky mechanics and how this game wasn't worth it. Guess what? It's not true.

I've just played this game, managed to get a game in 2,5 hours, had a blast playing and didn't encountered any problems with the rules. I think that because it's italian it gest bad rap, just don't buy into it. This is an adventure game that gives you strategic options and a fun combat system.

It might be already late as this is OOP, but if you see it just buy it. Excelsior!
J
joseaguerof Top 50 Reviewer 19 reviews
Comments (0) | Was this review helpful to you? 0 0
A disappointing dud.
August 20, 2008
Rating
2.0
MH is a disappointingly dry exercise that doesn't live up to the flashy theme and cool minis. It's not even that great a strategy game because the complicated rules and awkward language (threat, trouble, troubleshooting... *snore*) keep the gameplay from becoming second nature and allowing the strategy and/or theme to take center stage. Perhaps it gets a lot smoother once it becomes more intuitive, but I don't have the interest to slog through it and get to that point.

I also think the designers did a poor job of implementing any kind of narrative structure to the game. The combat is thematic, but the stories, headlines, and scenarios have pretty much no flavour to them. The worst offender is the victory points. What are these supposed to represent? I'd be into this game so much more if the end goal was defeating the arch nemesis. THAT'S what super hero comics are all about and THAT'S how a player should win the game.

The downtime while other players are troubleshooting and going through combat can be really, really boring. I watched a combat between Kingpin and Dr. Strange go for five rounds of combat (which is a loooong time -- that's 30 dice rolls plus all the other considerations that go into that combat, plus the troubleshooting stage to get to this point), but it was never tense, or fun, or interesting. It was just long. This is probably best with 2 players so that you're always involved.

Despite my complaints, it's a game I'm willing to occasionally play because I'm a comic nerd and I do enjoy building a hand of villain and ally cards.
B
bfkiller Top 50 Reviewer 14 reviews
Comments (0) | Was this review helpful to you? 0 0
Discuss this article
Log in to comment
Posts in discussion: Marvel Heroes