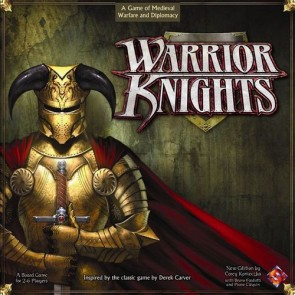 The Kingdom is in chaos. The King lies dead without an heir, slain by a villainous hand. Will a leader rise up and rally the support of the people, or will the shadow of anarchy spread over the land?

Through the deliberation, it is plain to see that this conflict will not end without bloodshed. With such power at stake, there will be no compromise. Even now, each Baron plots to gain advantage and hires hardened mercenaries to strengthen his forces. Soon the crashing of marching boots and the roar of battle will drown out the negotiations taking place at the Assembly. Fortresses will fall, cities will be razed, and a King will be crowned. Warrior Knights is a game of medieval diplomacy, politics, and war. It is playable by 2-6 players in 2-4 hours. A re-design of the 1985 classic, this edition features modernized, streamlined mechanics and gorgeous, high-quality components.