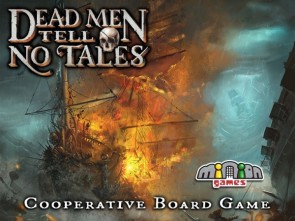 For years you’ve been tracking Skelit’s Revenge, the most notorious ship on the high seas — and now you’ve finally taken it! Your Captain has informed you that there are treasure chests hidden on board brimming with the most valuable booty the world has ever seen. In spite of the raging inferno aboard the ship, your captain orders you and the rest of his crew to loot the Skelit’s Revenge and bring him every single one of those chests — or you’ll be taking a long walk off a short plank! But beware! There are still enemy pirates lurking about and nasty guards looking to make certain you don’t get out alive. You’ll have to battle the flames, the guards, and your own fatigue to recover the treasure and receive more riches and glory than you ever dreamed!

You and your crew will enter and search the Skelit's Revenge in an attempt to loot all of the Treasure. But beware, there are still enemy pirates lurking, and some nasty guards looking to make sure you don't get out alive. Not to mention that you'll be doing this while the ship burns. You'll have to battle the flames, the guards, and your own fatigue.

Dead Men Tell No Tales (DMTNT) is a cooperative game where players take on the role of a Pirate crew, boarding the doomed Skelit's Revenge for one purpose: to take the loot. You need to deal with the spreading fire and explosion potential as well as the enemies left on the ship. But what's a little risk for the plunder!

Each round you flip over a new tile to add to the ship and you also flip a card to show where the Skeleton Crew advances. You may then take a number of actions and use shared equipment to deal with the fire, your own fatigue, the trapdoors and guards on the ship. In DMTNT you can even pass some of your action tokens to the person to your left in case they need extra help this round.

Simple to resolve combat feels engaging without taking more than a quick die roll. You will be constantly gaining fatigue and you must manage your ability to keep going.

ubarose replied the topic: #198593 01 Mar 2015 21:37
It's being compared to Pandemic, Forbidden Island/Desert, and Flash Point: Fire Rescue, and it's Minion Games, so I don't really have high hopes for it as a game full of pirates goodness.

SuperflyPete replied the topic: #198647 02 Mar 2015 13:01
I wanted this game but I kind of think it's just a pirate version of that co-op firefighter game mixed with Drakon. Not enough to want to buy it.

Last Night on Earth: The Zombie Game
5.0
B bfkiller
"It's not challenging. It's not complicated. It's not..."