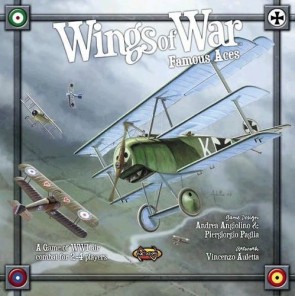 Wings of War is a game series that merges card and board game mechanics to recreate aerial combat. The first series of Wings of War games focus on the "knights of the air" age, World War I, portraying the abilities of the fighting planes of this period.

Wings of War: Famous Aces is the first set of the WWI collection. It includes five types of planes: the Spad XIII, Albatros D Va, Sopwith Camel, Fokker Dr1 and the Sopwith Triplane. Each one was flown by an ace: Baracca, von Richtofen, Rickenbecker, Fonck, Olieslagers and Baker.

5 stars
(2)
4 stars
(1)
3 stars
(1)
2 stars
(0)
1 star
(0)
Rating
4.3
Already have an account? Log in now or Create an account
Killer wargame for introducing the kids to head-to
November 08, 2008
Rating
5.0
Wings of War's rule book provides a very basic option, and then a set of rules that you can mix and match as your players are ready to step up in complexity. This is a perfect option for when kids are in the mix.

My oldest boy enjoyed play at age seven with the most basic rule set. We've since added in special damage rules, tailing, and altitude is coming into the picture now. We started with just Famous Aces but now include miniatures.

I've played with my non-wargaming buddies and they enjoyed it well enough, but it's been really rewarding with my boy. My daughter gets in now and again too!

Sag.
S
Sagrilarus Top 50 Reviewer 30 reviews
Comments (0) | Was this review helpful to you? 1 0
Fun introductory level game
September 22, 2008
Rating
5.0
Your plane is a card, you've got manouver cards as well as damage cards. Hell yes, everything is played with cards which I enjoy over a fine map of Star Wars Battleships miniatures games, just for kicks.
That would be great, if they'd provided or sell a map for playing this fine game.
Anyway, onto the game, it's fun, 30 min tops, easy to grasp but hard to master like any good arcade game.
It's a great 2 players game or 2 vs. 2 game and the fun comes from trying to foresee where the enemy will be to attack him. Sometimes the range seems too short and also with a little skill it can be a very hard to get the last 2 planes aligned. Maybe, some scenarios could fix this by providing a possible destination.
J
joseaguerof Top 50 Reviewer 19 reviews
Comments (0) | Was this review helpful to you? 0 0
Fun game, but currently collecting dust
August 07, 2008
Rating
4.0
Wings of War is a fun, little, WWI, dog fighting (airplanes, not canines) game. It's quick, chaotic and explosive! I like the open table mechanic and planning out your maneuvers in secret and executing them in three phases. It's got tons of planes, with real pilots/nationalities for you history buffs and a couple of different maneuver decks that give each type of plane it's own feel. You have faster, less maneuverable planes and slower planes that can turn on a dime.

Puerto Rico
4.0
J jeb
"It's an excellent game, but there are definitely times I..."

StarCraft: The Board Game
5.0
S Ska_baron
"Great feel of the PC game and tons of tense..."