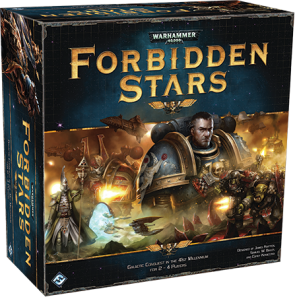 Bring fire and bring shell and heap all upon the pyre. With flame and gun we shall make an end to the withered husk that is human life. And in the blazing furnace of battle we shall forge anew the iron will of a yet stronger race.

Fantasy Flight Games is proud to announce Forbidden Stars, a new Warhammer 40,000 board game of planetary conquest and war for two to four players!

The shifting Warp Storms that surround the long lost Herakon Cluster have finally abated, leaving the ancient treasures and planets within this sector open to the rest of the galaxy. Now, the great factions of the galaxymobilize their fleets and race to establish a foothold. The reward for successful domination surpasses all other concerns, and the price for conquering this sector will be paid in lives.

Forbidden Stars challenges you and up to three other players to take command of a mighty fighting force: the Ultramarines chapter of Space Marines, the Eldar of Craftworld Iyanden, the Evil Sunz Ork clan, or the World Eaters Warband of the Chaos Space Marines. Each faction offers unique armies and play styles, but your goal remains the same – to claim the key objectives selected for your faction. These objective tokens are scattered throughout the Herakon Cluster, but your opponents are sure to defend your objectives against you. You’ll need to build massive armies and command them in unending war to best your enemies and claim your objectives. The fight for the Herakon Cluster is brutal and bloody, and you will either stride triumphant over the bodies of your fallen foes, or they will do the same to you.

Lord of the Rings: The Confrontation
5.0
B bfkiller
"It plays like an abstract but is surprisingly thematic. ..."