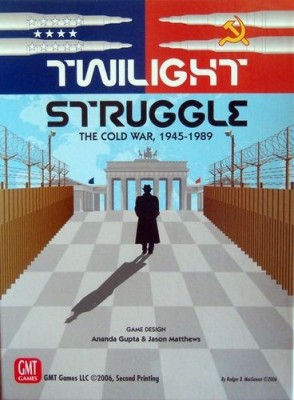 A card-driven game game about the cold war between the USA and USSR.

Twilight Struggles' Event cards add detail and flavor to the game. They cover a vast array of historical happenings, from the Arab- Israeli conflicts of 1948 and 1967, to Vietnam and the U.S. peace movement, to the Cuban Missile Crisis and other such incidents that brought the world to the brink of nuclear annihilation. Subsystems capture the prestige-laden Space Race as well as nuclear tensions, with the possibility of game-ending nuclear war.'

Rating
4.8
April 22, 2019
Rating
5.0
Deserves all of the accolades it has received. It recreates the tension and suspicion of the Cold War in ways that are a little unsettling. It forces the players to think like large superpowers, worried if random movement in isolated areas means larger plans, and disregarding the sovereignty of smaller nations. That it is a tactically and strategically rich game is almost gravy at that point. Definitely one of the best two-player games out there.
SI
san il defanso Top 50 Reviewer 55 reviews
Comments (0) |
August 29, 2019
Rating
5.0
MT
Matt Thrower #1 Reviewer 286 reviews
Comments (0) |
April 19, 2019 (Updated: December 15, 2020)
Rating
4.5
This is an excellent game, an all time great. It's relatively short, plays using the great CDG wargame system and has wonderful themed events. It is a tight tense game as well, if slightly unbalanced. It also has a surprising thematic resonance and teachability that belies its complexity.

While I do have a couple critiques, they aren't particularly serious. It relies almost entirely on card knowledge. For such a highly thought of game I find it surprising how much it relies on many, many plays to reach its pinnacle. Playing between players of different experience is virtually impossible. I also think it misses out on a ton of tension by cycling the cards so little--there is very little "Do I play this now to get it out of the deck?" since you know you will see a card *maybe* 2 times and as low as 1 time.
GS
Gary Sax Top 10 Reviewer 101 reviews
Comments (0) |

5 stars
(3)
4 stars
(1)
3 stars
(0)
2 stars
(0)
1 star
(0)
Rating
4.8
Already have an account? Log in now or Create an account
Best Strategy Boardgame
August 18, 2008 (Updated: August 18, 2008)
Rating
5.0
Twilight Struggle is a first-class strategy boardgame where the Cold War is played in its' entirety. Influence chits are added to or removed from individual nations and fought over with card play that can directly affect the Influence through Operations Points or the cards may be played as historical Events with associated in-game effects. Rules for the Space Race, Coups, and a Defcon track that keeps the world on the edge of nuclear war are presented, though failure through starting a nuclear exchange is not rewarded. There's critical decisions that must be made every turn and TS can be very unforgiving. The general flow of the game provides a great historical feel. The rules are fairly simple, winning the game isn't.

As already mentioned in the previous review this is only a wargame in the loosest definition of the word. Armies do not at any point hit the table or move across the board, Influence does. Influence is political, cultural, religious, creative, and military in nature. BUT there is a very high amount of direct conflict (which by itself isn't the sole criteria for what constitutes a wargame) in TS, this isn't some multiplayer solitaire eurogame. Players actions against each other can be harsh and felt fairly quickly. This is not for people who try to avoid confrontation in games.